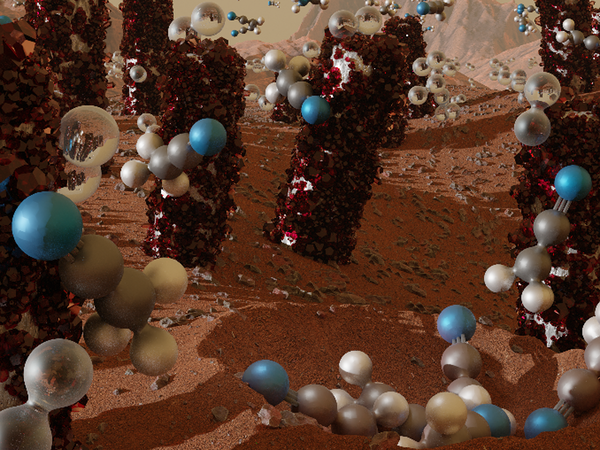 Thanks to its chemical composition and topography, the new nanomaterial can be imagined as the surface of Mars, only scaled down many times.
Photo: Martin Pykal
Monday 10 January 2022, 13:03 – Text: Martina Šaradínová

Scientists from the Czech Advanced Technology and Research Institute (CATRIN) of Palacký University Olomouc and the Technical University of Ostrava (VSB-TUO) have developed, in collaboration with colleagues from the Leibniz Institute for Catalysis in Rostock, Germany, a unique eco-friendly nanomaterial that can enable cheaper and more effective production of many important pharmaceuticals and chemicals. The results of this Czech–German research were published at the end of the year in the prestigious journal Nature Catalysis.

Scientists focused on efficient production of various chemicals used in the pharmaceutical, agricultural, petrochemical, or food industry by so-called hydrogenation—a reaction using molecular hydrogen. One of the necessary conditions to accelerate these chemical reactions and achieve higher yields is the use of a catalyst. The goal was to develop a cheap and non-toxic material that could make organic compound conversions cheaper and more efficient. Currently, the industrial production particularly relies on noble metals such as platinum, palladium or ruthenium, which are costly. Nickel also serves as an effective catalyst; it’s toxic, however.

“Together with German colleagues, we studied the processes of a hydrogenated synthesis of amines, which are precursors or intermediates especially in the manufacture of pharmaceuticals. Amine groups are present in more than 40 percent of all pharmaceuticals. But amines also play an important role in the production of dyes, plastics, tenzides, disinfectants, or agricultural chemicals. While developing a new hydrogen catalyst, we bet on iron and silica, i.e., widely available, non-toxic, and cheap materials,” said Manoj Gawande from CATRIN Olomouc.

Preparing this new nanomaterial is, according to scientists, cheap and technologically easy to transfer to an industrial scale. The material can be used repeatedly and is extremely effective in synthesizing a wide range of amines. “Thanks to its chemical composition and topography, the material can be likened to the surface of Mars, only on a much smaller scale. Rod-like iron nanoparticles grow from quartz mass, thus forming sort of craters on the surface of the catalyst. The iron nanoparticles are coated in a multi-nanometre shell of iron oxide, which seems to be absolutely crucial for achieving a high amine yield. Equally important is the presence of small amounts of aluminium,” described the material Radek Zbořil, one of the corresponding authors based at CATRIN and VSB-TUO. The explanation of the relation between the chemical composition of the catalyst and its extraordinary efficiency made it particularly challenging for the Czech–German team.

“It’s an almost magical nanomaterial in which all components have a defined role. I believe that this joint work can have a major impact on the global effort to find an industrially usable low-cost catalyst that can replace the noble metals used so far and which will also work in other important reactions deploying molecular hydrogen,” concluded Matthias Beller, who is the German team leader and director of the Leibniz Institute for Catalysis in Rostock.

Scientists have successfully tested the nanomaterial for more than 80 organic reactions including the synthesis of so-called fatty amines. These are widely used in the production of agricultural chemicals, cosmetics, antimicrobials, and a wide range of other products. Their market turnover is over US$3 trillion.