Czech it UP, textbook series for foreigners, is complete 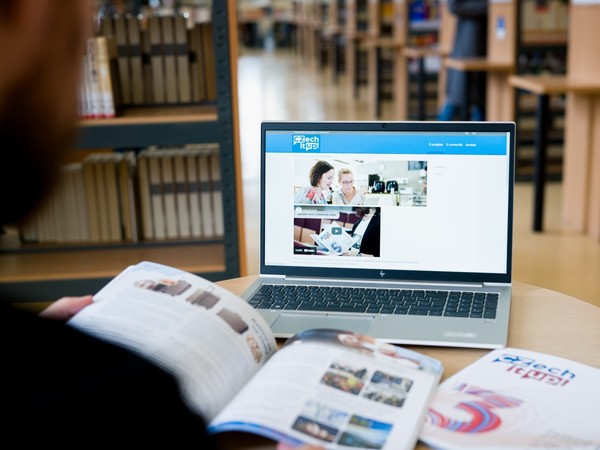 Czech from A to C. This could be an alternative title for the series of Czech textbooks for foreigners called Czech it UP. The Palacký University Press is now presenting textbooks for intermediate students at the A2 and B1 level, which complete the series, covering the whole range of language education from beginners (A1) to advanced (C1). The textbooks, inspired by the modern Oxford style of teaching materials, have been prepared by experts from the Department of Czech Studies at the UP Faculty of Arts together with Olomouc lecturers of Czech for Foreigners.

The Czech it UP project was commenced in 2020, following up on a more than thirty-year-long tradition of teaching Czech to foreigners in Olomouc. This tradition has been represented by special study programmes and courses for foreigners as well as the popular Summer School of Slavonic Studies, which attracts hundreds of students from dozens of countries around the world every year.

After absolute beginners (A1) and the most advanced students (B2 and C1) were delivered their respective Czech it UP textbooks, the time has come for foreigners at the intermediate level of Czech language skills who can now also utilise their own Czech it UP textbooks. The new A2 level textbook is designed for more proficient beginners who have already successfully mastered the basics of Czech, while the new B1 level textbook will be used by intermediate students. “Two relatively independent teams have been working on the project since its inception. The overall concept and mechanism of collaboration was designed in such a way that all the materials had a uniform structure and methodological basis and were compatible in their explanation of grammatical phenomena. Judging by the feedback from foreigners whom I teach on the basis of our textbooks, as well as from colleagues among Czech teachers both in this country and abroad, we have succeeded in our mission,” said Darina Hradilová, head of the author team of the B1–C1 textbooks.

“I’d like to thank all our co-authors, including a number of PhD students, for their work on the project. Thanks to their fresh ideas, our textbooks have a pleasant dynamic and include communication topics which are close to today’s young generation,” she added.

Tereza Švarcová, who participated in the preparation of the textbooks for beginners at the A1–A2 level, confirmed her words. “When creating the textbooks for beginners, we paid particular attention to the use of modern natural speech that students will encounter when communicating with native speakers of Czech. In addition, the beginners’ textbooks are unique in the way they work with vocabulary. The emphasis is put on the active use of key vocabulary, which is supported by an unconventional vocabulary list at the end of each lesson.”

The Czech it UP series provides students and teachers not only with textbooks and exercise books, but also with accompanying authentic audio recordings and videos by UP Audio-Visual Productions, available on the czechitup.eu website. Czech it UP reflects the latest trends in teaching Czech to foreigners, with topics geared to the current era and contemporary generations. It facilitates learning by using the Oxford UP “language textbook style”, where all elements necessary for a given language issue are situated on two facing pages.

“Even in a mere two years, the Czech it UP textbooks have become firmly established in Czech language teaching both in this country and abroad, so I believe that the potential of the project will be further enhanced by the current completion of the entire series. I would like to thank all the authors and their often heroic efforts as they have managed to create the entire series of timeless textbooks in just two years; their work will serve us for many years to come,” added Aleš Prstek, the UP Press director.

More detailed information about the Czech it UP series, including the possibility of sampling and/or purchasing the textbooks, can be found on the czechitup.eu website. The entire series will also be presented to the public at Book World Prague 2022 on 9–12 June. At this international book fair and literary festival, UP Press will also organise a public debate on the trends in teaching Czech to foreigners, on Sunday 12 June at 11 am.