Do nanomaterials harm living cells? We know how to test this reliably 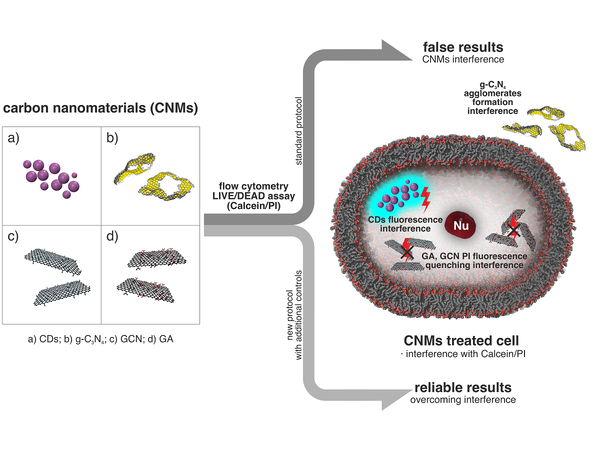 Schematic representation of four types of carbon nanomaterials (left) and then the appearance of different interferences when they interact in the cellular environment or with commercial dyes used in flow cytometry. Illustration: CATRIN
Monday 13 September 2021, 13:00 – Text: Martina Šaradínová

“We found that interactions between carbon nanomaterials and chemicals that are part of standard toxicology test procedures can negatively affect the test results. Indeed, the values obtained for the cell viability did not reflect the interaction of the nanomaterials with the cells but the effect of those materials on the fluorescence properties of the dyes of the relevant tests. Therefore, in the protocol for the flow cytometry method, we used more control samples to help us detect these negative effects. Based on additional controls, we have created a new approach for evaluating this method that overcomes the interaction with fluorescent dyes and allows reliable in vitro testing of carbon nanomaterials toxicity,” explained the first author of the study, Tomáš Malina.

The work is a significant contribution to the field of nanotoxicology. It is a ground-breaking field of research since nanomaterials cannot be studied as common chemical compounds primarily because of their complex behaviour. This is manifested by the multi-level interaction between nanomaterials and living cells.

“Any research aimed at the interaction of nanomaterials with living cells or biological systems is generally extremely important and has a strong impact on the future real-world applications of nanomaterials. Carbon nanomaterials, whose applications are growing enormously in a number of areas, including biomedicine, should be reliably tested. We want to offer our newly developed strategy to the entire community of carbon research,” added Poláková. The work builds on years of research by a team from CATRIN-RCPTM into the interaction of biological systems with carbon nanomaterials of various dimensions, such as carbon dots, graphene derivatives or its nanosilver composites. The expansion of the scientific cooperation opens up further possibilities for assessing the safety of nanomaterials used in practice.