Magnetic Separator Developed by UP Scientists 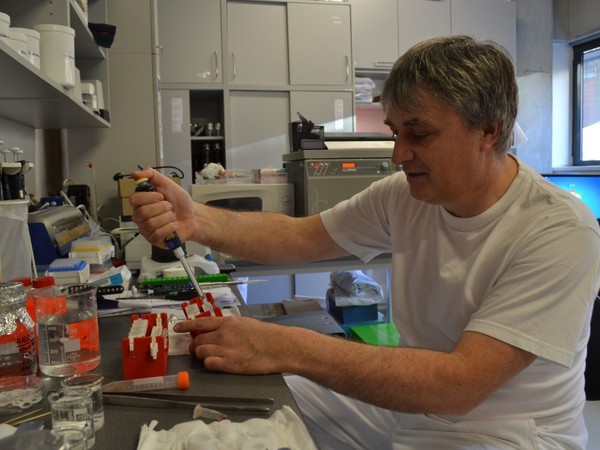 A unique laboratory device, unparalleled on the market, has been developed by a research team led by Karel Koberna from the Institute of Molecular and Translational Medicine at the Faculty of Medicine and Dentistry, Palacký University Olomouc. The special separator, UniTrap, can be used for magnetic separation and laboratory diagnostics and in magnetic particles research. This unique device can be purchased via the e-shop of the UP Science and Technology Park.

“The separator has several key advantages: it is easy to operate; it enables fast, high-yield separation; and it is compatible with all standard test tubes and multichannel pipettes. Under the auspices of Palacký University, we are selling a unique laboratory device which we can tailor according to the customer’s needs,” said Petr Kubečka, Head of the Technology Transfer Department at the UP Science and Technology Park (UP STP).

In 2014, Karel Koberna’s team applied to the Proof-of-Concept Projects at the UP STP with an idea to create a device for the separation of magnetic particles. These projects support research activities leading to commercial applications and are financed by the Technology Agency of the Czech Republic within the GAMA Programme of applied research, experimental development and innovation.

“Such a device meeting our requirements was not commercially available then, so we decided to construct our own separator. At the time when we applied for support, we already had the first prototype, which however had a lot of flaws. We needed to improve the device, achieve its ideal form and offer it to other users," said Karel Koberna about the beginnings of its development.

Olomouc scientists obtained 3D modelling software and began work on improving the prototype, which was on the table within six months. During 2016, a Czech patent was granted and then international patent protection was applied for. The project by Koberna’s team, originally planned for 18 months with a €18,000 budget, was successfully concluded after a mere 9 months by the end of 2015, with reduced overall costs of €12,500.

The magnetic separator, now significantly supported by the UP Science and Technology Park, was further developed in 2016 on the basis of more tests and users’ input. The reason was mainly in the fact that its production costs were still too high. Scientists thus developed another prototype, which can be easily produced in the 3D print shop at the Park and whose control is absolutely intuitive. This solution is also based on the patented position of magnets in the device.

In collaboration with an industrial designer, Koberna’s team created a modular system which can be used universally for various-sized test tubes. Last but not least, they have managed to make the appearance of the separator more attractive, by combining 3-D print in white and red plastic.

“A project of this kind has to be started with a clear vision and with a product which is relatively simple and whose realisation, at least to the stage of industrial protection, does not require a long period of time. The completion of the project does not mean the end of the product’s development. We have only gained an advantage which has to be followed up on,” Karel Koberna pointed out.

After initial testing, the commerce team at the UP STP created a website and a sales strategy for the separator. The website www.magneticunitrap.cz also includes an e-shop where the separator can be purchased. Together with the commerce team at the UP STP, Koberna will be looking for new clients who might be interested in selling the product or purchasing its whole production licence. In March 2017, a new call for proof-of-concept projects will be launched.

More information is available at www.vtpup.cz.