Roll up your sleeves! Second year of blood donation contest 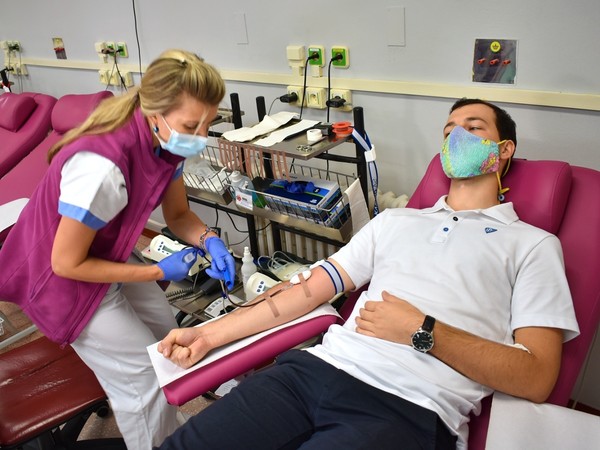 For the second time now, students of the UP Faculty of Health Sciences are challenging their peers and employees from other UP faculties to a blood donation and now also blood plasma donation contest. The challenge will run the entire winter semester under the motto “Roll Up Your Sleeves” and will culminate with the announcement of the results during the UP Academic Days in February 2022.

The contest will be launched on Wednesday, 20 October at 8 am at the Transfusion Department of University Hospital Olomouc; UP Rector Martin Procházka and Dean of the UP Faculty of Health Sciences (FHS) Jiří Vévoda have promised to participate along with other early donors.

The competition will measure the total volume of blood donated by students and employees of each individual faculty, and the percentage of donors among students. Compared to the first year, other categories have been added. “As new plasmapheresis centres have been opened, the Transfusion Department reports a shortage of blood plasma donors. Therefore, we have added a new category this year, allowing blood plasma donations to join the competition as well. In addition, participants can look forward to other smaller competitions and quizzes with prizes from our sponsors,” said Simona Konečná from the organising UP FHS Student Association.

It is possible to donate blood or blood plasma at any donation point in Olomouc. Joining the competition is very easy: just fill in the form, receive a stamp at the selected donation point, and then place the form into one of the collection boxes located at the faculties as well as at the Olomouc Transfusion Department.

“Dear students, reach out to your classmates, friends, and teachers; together let’s help those who have been less fortunate,” Konečná said in her call for student participation.

The competition of faculties is organised by the UP FHS Student Association in cooperation with the UP Communications Office and the Transfusion Department in University Hospital Olomouc. The second year of the competition will be held throughout the winter semester and will culminate during the traditional Donate Blood with the Rector event, an integral part of the UP Academic Days in February, during which the Olomouc’s university commemorates its re-establishment in 1946.

During the first year, students and employees donated a total of over 119 litres of blood, with the Faculty of Science contributing the most. You can recall last year's Battle of the Faculties through this article.

Palacký University Olomouc has been supporting blood donation for a long time; it was recently awarded a commemorative plaque and a certificate of appreciation by the Czech Red Cross Olomouc for supporting blood donation and the activities of the Czech Red Cross. Information about the traditional event Donate Blood with the Rector and more can be found here.