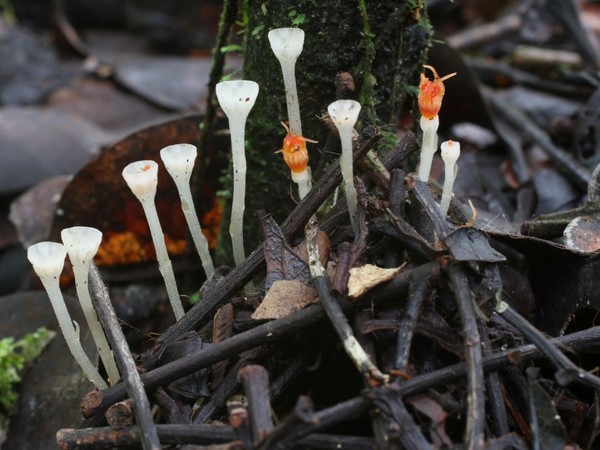 So far, the smallest species of Thismiaceae has been discovered on Borneo by a team of scientists from the Faculty of Science of Palacký University and the Crop Research Institute. Thismia minutissima has a very special appearance and does not resemble any species of Thismiaceae growing in Borneo and other parts of the world. Scientists have noticed the tiny plant thanks to its bright white stem.

A description of the new species was provided by Kew Bulletin. “Zuzana Sochorová was the first to notice this plant. On our joint trip to a mountain forest in Borneo, she was looking for mushrooms and noticed white, sponge-looking fruits. As a mycologist, she sees slightly different shapes and colors than we botanists do,” said Martin Dančák from the Department of Ecology and Environmental Sciences.

Thismia minutissima is unlike any other species, not even those described in Borneo. According to Martin Dančák, this is probably the smallest Thismiaceae that has been discovered so far. The name chosen by the team of Olomouc and Prague biologists also corresponds to this.

This Thismiaceae is also interesting in that its flower has three elongated pendants of petal on top, which are upright and often crossed. “The internal structure of the plant and the stem is also unique. The stem is pure white, which is not known in any other plant from Borneo. Mostly the Thismiaceae are brown, sometimes even black. The flower is only a few millimeters in height,” added Martin Dančák.

Thismiaceae often occur in only one locality or a group of nearby localities. But the newly discovered species grows on an area about 700 kilometers long. “It occurs in both the northern and the southwestern part of Borneo. We assume that it is also located elsewhere in the interior,” said Michal Hroneš from the Department of Botany.

The plant grows in mountainous areas at altitudes from 500 to 1200 meters, while the whole interior of Borneo is mountainous. “The local mountain forests are currently largely preserved, unaffected by logging. The problem is that we cannot get to those potential localities to explore them,” added Michal Sochor from the Crop Research Institute.

Thismia minutissima is the thirteenth new plant species that scientists have found in Borneo. Experts from Olomouc have been going on expeditions to the rainforest in Borneo for several years. Among the last “caught” Thismiaceae were Thismia ornata and Thismia coronata.