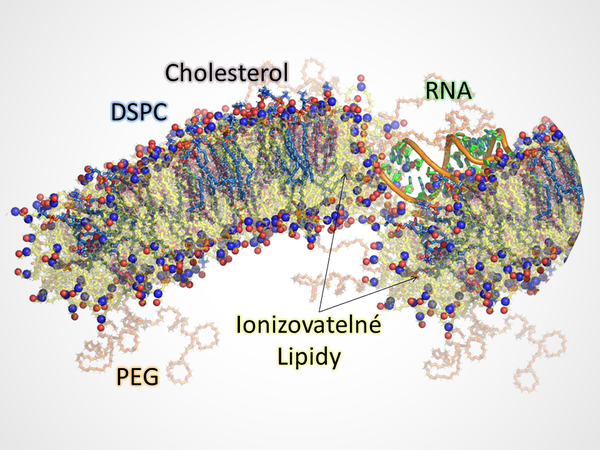 A snapshot of the performed simulations shows RNA interacting primarily with ionisable lipids (shown in yellow), while cholesterol and phospholipids (DSPC) are separated in another part of the system.
Source: CATRIN UP
Wednesday 24 November 2021, 13:00 – Text: Martina Šaradínová

How do lipids used in current mRNA vaccines against COVID-19 behave? Can they affect the vaccines’ properties? Why are they stored under different conditions? It is these questions that motivated computational chemists from CATRIN of Palacký University and from IT4Innovations VSB-TUO, Ostrava, to carry out research that led to creating a unique model of lipids used in COVID-19 vaccines. The theoretical study was published (on the cover page) by The Journal of Physical Chemistry Letters.

Without lipid nanoparticles, mRNA vaccines would be impossible. They form a protective coating around the mRNA and ensure its safe transport to human cells. But why do Moderna’s and Pfizer&BioNTech’s vaccines have different properties when they vary only minimally in composition?

“Given our relatively extensive experience in simulating lipids, lipid proteins and their interactions with other substances, we were interested to find out the reason. Using computer molecular dynamic simulations, we were able to create a model of the lipid mixture used in vaccines and describe why the mixture used in the Moderna vaccine is more stable. We have also described the basic behaviour of lipids,” said one of the authors of the theoretical study, Markéta Paloncýová.

“The computer simulations we run can provide unique information about the behaviour of highly complex molecular systems, with atomic resolution. The point is that we can intervene relatively easily to alter the conditions and composition of the studied systems. Using supercomputers, we are able to carry out experiments that are almost inconceivable in practice, and we thus obtain valuable information, that could be used, for example, to design new ‘delivery envelopes’ for cell therapies,” said another author, Michal Otyepka.

Computational chemists created various models of lipid mixtures on the supercomputer of the Ostrava centre IT4Innovations, ranging from simple bilayers to complex systems. They also played with the pH setting since ionisable lipids are employed because they alter charge and properties when the pH is changed.

“We found that the ionisable lipids—the lipids specific to nanoparticles in vaccines—behave differently from the common lipids we have in our bodies. They don’t tend to form simple membranes, but rather disordered 3D structures. Also, with the other lipids used, they do not produce a homogeneous mixture, but ionisable lipids create a special phase, which in turn interacts with RNA,” said Markéta Paloncýová.

The study of lipids in the context of mRNA vaccines is being conducted, among others, in an effort to find a compromise regarding their stability. They must be stable enough to deliver RNA, but at the same time they mustn’t accumulate in the body.

“Our long-term goal is to understand what exactly lipids and their structural elements cause, and how they affect the properties of the vaccine. Its global functioning in the body is already known, but, in an experiment, atomic resolution is not possible to achieve. Such an insight can be provided by simulations only. So far, we’ve been only able to model a small portion of the nanoparticle. In the future, we would like to model a whole nanoparticle and do a multiscale modelling. Understanding the interactions between RNA and lipids at the atomic level may lead to proposing a better composition of lipid nanoparticles and properties of RNA-based vaccines and other drugs,” said Paloncýová.