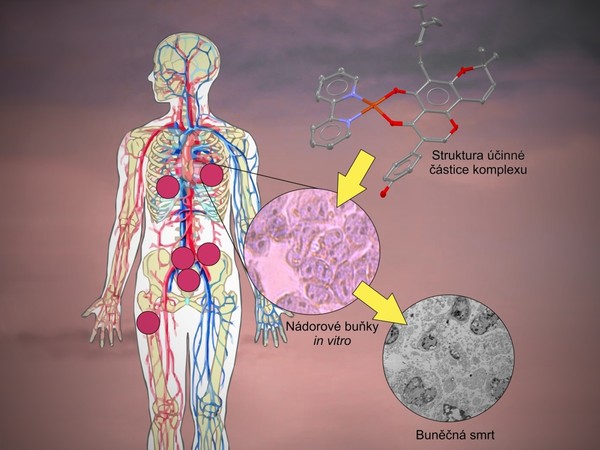 New substances that have a chance of becoming part of cancer pharmacotherapy in the future have been developed by scientists from the Regional Centre of Advanced Technologies and Materials (RCPTM) at UP. The new group of copper coordination compounds contains natural substances in their structure isolated from the fruit Maclura pomifera (Osage orange, hedge apple). The new substances show marked effects against cancer cells along with low toxicity to healthy human cells. The discovery has already been protected by a national patent.

One of the team’s long-term goals is to extend, by innovating the composition and mechanism, the range of anticancer agents with those that will be more effective than metal compound-based drugs, especially platinum, which are commonly used today. At the same time, they will a have noticeably greater effect against cancer cells, while being almost non-toxic to healthy cells and producing lower adverse side effects.

“The development of a third generation of copper coordination compounds is our latest, notable achievement in this area. These compounds differ significantly in composition and structure from previously presented copper-containing substances, which received patent protection in 2012 and 2017. These are complexes containing small organic molecules, or ligands, from the group of natural isoflavones. Specifically, these are osajin and pomiferin, which were originally isolated from the fruit tree Maclura pomifera,” explained the team’s leader, Zdeněk Trávníček.

In terms of the scope of their effect on human tumour cell lines, these compounds are comparable to their predecessors from the RCPTM ‘factory’. “The most efficient substances surpass the effects of the most widely used complex drug—cisplatin—by up to 100-fold, with their toxicity to healthy human liver cells appearing almost negligible,” said another member of the research team, Ján Vančo.

The use of the new and unique copper complexes in cancer therapy, specifically in the treatment of malignant tumours in the ovaries (including those resistant to the most commonly used drug, cisplatin), breasts, prostate, colon, rectum, bones, or lungs, has been protected since last July by a patent entitled Heteroleptic copper complexes with osajin and pomiferin and their use in preparing drugs for treating cancer (CZ patent no. 308426, authors: Trávníček Z.; Vančo J.; Dvořák Z.)

However, the patent’s authors point out that the road to using the prepared substances as pharmaceuticals is still long and rather bumpy, and many more experiments and collaborations with strong partners from both the biomedicine and pharmaceutical industries will be still needed for their possible application.

The development of the substances took about five years. Substances with an anticancer effect have been of interest to Olomouc scientists for a number of years. Overall, Prof Travníček's team has already obtained 17 national and two European patents that protect the biomedical use of a range of compounds based on gold, copper, iron, platinum, and tantalum. They all have distinct anti-tumoral, and some of them simultaneously anti-inflammatory, effects.