3D audio-tactile maps for the visually impaired developed at UP 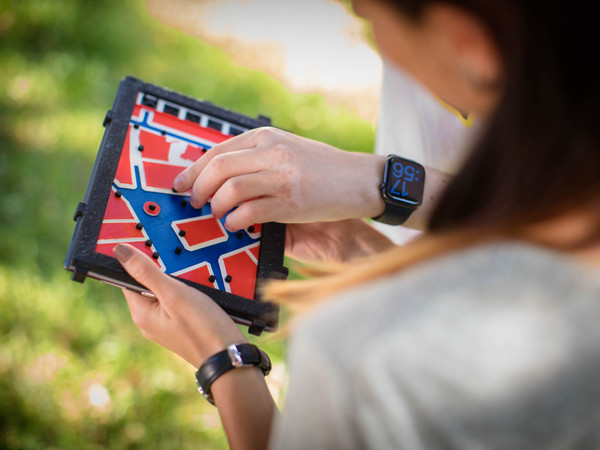 People who are visually impaired, in order to find their way and orient themselves in their surroundings, can today rely on 3D tactile maps created with modern 3D printing tools. This unique aid has resulted from research conducted by scientists from the Institute of Special Education Studies at the UP Faculty of Education and the Department of Geoinformatics at the UP Faculty of Science.

Although the concept of geospatial data and information communication is the subject of much ongoing research in the field of cognitive cartography, Palacký University scientists were the first to use modern technology and knowledge acquired in the education of visually impaired people, including training in the use of tactile-auditory tools. The results of this research open up new possibilities for acquainting visually impaired persons with modern technologies in groups//classes. A group of visually impaired people thus gains the opportunity to move independently in space, which is a very important aspect of their life in society.

On the basis of the acquired knowledge and the specification of the required functionality, a beta version of the TactileMapTalk mobile application was developed in 2018 for Android. The application underwent a significant upgrade in 2019 and the final version 10.5 has been placed on the project’s website, where it is available for public download.

“Tactile maps, in our conception, are maps printed with a 3D printer. They are used for spatial orientation – mostly during training, anchoring, and rehearsing the route. They are typically used after training with a guide so that the person with visual impairment can anchor the route, remember it, and so on. Our main goal was to achieve such a level of detail in the map that it makes it possible to distinguish individual 3D structures in the form of orientation points by touch. These serve as trigger points for the audio component. Based on acquired knowledge, new prototypes of typhlomaps (maps for the visually impaired) were continuously created for user testing and now also in work with the target group when practicing movement in space,” said Veronika Růžičková, main investigator of the project “The development of independent movement through tactile-auditory means”, supported by the Technology Agency of the Czech Republic (TACR). Researchers from the Institute of Special Education Studies and the Department of Geoinformatics, as well as students of doctoral study programmes and independent experts, took part in the project.

The actual implementation of the project was preceded by professional research and discussed publicly with experts, with focus on didactic approaches, the needs of the target group, and how to work with the group, as well as on technological approaches, user aspects of tactile maps, and modern approaches in typhlocartography.

The original design of tactile maps intended for user testing was created by UP researchers in 2018 and was based on acquired knowledge and the Touchlt3D technology developed at the Department of Geoinformatics. After that, the first typhlomaps in sizes corresponding to smart phones and tablets were created for three locations chosen by experts, in the town centres of Ostrava, Opava, and Nový Jičín. During 2019, the process of map production and accompanying technologies was optimised several times.

Within this TACR-supported project, the Olomouc town centre was also mapped, as well as a new typhlomap depicting the relief of the Czech Republic. Olomouc scientists also enhanced the functionality of their maps during 2020 – thus the third-generation typhlomaps were developed, with an improved option of switching between voice modes. All the original maps of the second generation as well as the newly created maps of the biggest Czech cities Brno and Prague were subsequently fitted with new buttons enabling this option.

As Růžičková notes, user testing has shown that valid standards for typhographic imaging, when applied to 3D space, must be innovated to be perceptible by touch. “Similarly, individual testing has proved that the connection of 3D maps and voice output leads to a faster understanding of space and easier memorising as well as recalling. In addition to all these interactive maps, tentative non-interactive maps were also created, which were important especially in terms of methodology and didactics, due to the feedback we have received on them. We know now that this method of communicating the content of the map is appreciated as a suitable tool for teaching how to work with typhlomaps,” she added.

Individual presentations and conclusions from the testing are presented in the publication Typhlomaps–Typhlography–Typhlocartography. More information is available here.

Mgr. Veronika Růžičková, Ph.D., lecturer at the Institute of Special Education Studies, Faculty of Education, Palacký University Olomouc, focusses on the issue of persons with visual impairments. This specialisation includes a broad range of areas from the special education of visually impaired children and youths, lifelong learning, and education of seniors with visual impairments. In her practice, she works as a visual therapist and spatial orientation instructor for the visually impaired. She conducts research in the field of special education of visually impaired people and focusses mainly on the issues of rehabilitation and compensation for the loss of visual perception (typhlography, spatial orientation, tactile perception, visual therapy, etc.). She is the author and co-author of several monographs, including the book Tactile Maps Based on 3D Printing Technology and dozens of articles in conference proceedings and journals.