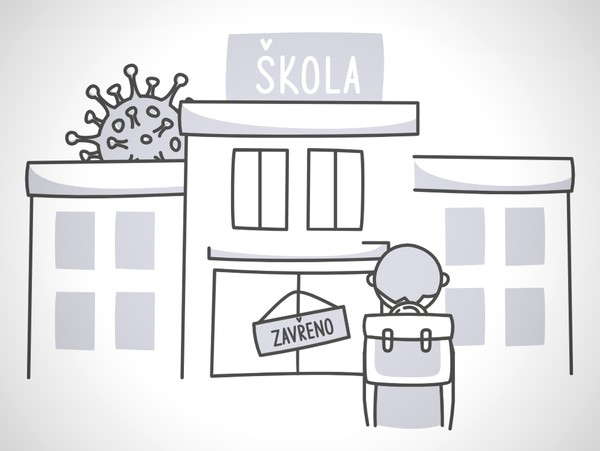 How did Czech children cope with the closure of schools due to the COVID-19 pandemic in spring 2020? Surprisingly well, says a study conducted in June by Palacký University researchers among schoolchildren aged 11–15 at almost 150 schools throughout the country. The children reportedly had more physical activity, ate more fruits and vegetables, and slept better. In addition, they significantly reduced the consumption of sugar-sweetened beverages and energy drinks. They also appreciated the amount of time spent with their families and all the new things they had a chance to learn. On the other hand, one in five children suffered from loneliness.

“As in the spring, the media talk about the increase in the number of infected people, the economic aftermaths of the pandemic, and the technical aspects of closing schools. However, the debate in the society seems to ignore the issues among the child population and the question of how the school lockdown is experienced,” explains Petr Baďura, head of the research team at the UP Faculty of Physical Education and a member of the HBSC study team. The research team intends to provide the obtained data and findings to other parties who are interested in collaborating with them in the context of the current closure of schools.

The results of the study suggest that the lifestyle of children during the “quarantine” changed for the better. Young Czechs were more involved in physical activities and positively adjusted their eating habits. Since they didn’t have to get up so early for school, they also got a lot more sleep. Almost 70% of them actually fell under recommended sleep requirement guidelines during the spring corona crisis. More than half of the children (58.4%) appreciated having more time for joint family activities. Almost two thirds of the pupils (64.1%) participating in the research claimed that the closure of schools gave them space to learn new things for which they did not have time before.

However, researchers also registered negative aspects of lockdown. One in five children lacked someone to open up to during the school closure. Girls suffered from feelings of loneliness to a greater extent, and fifteen-year-olds complained about the lack of contact far more than younger schoolchildren. On the other hand, despite the national restrictions in social contact, 63% of respondents stated that they rarely or never felt lonely during those critical times.

How did Czech children perceive the closure of schools?

School in the times of corona

How did Czech children perceive their school duties during the emergency? Two thirds of them (64.6%) felt that their school duties had increased. This was reported mainly by the older pupils in the research sample – seventh- and ninth-graders. According to their own estimates, children spent an average of 2 hours and 45 minutes a day fulfilling their school duties (girls about 20 minutes more than boys).

“The perceived increase in school duties does not necessarily mean that they have actually increased. It may be related to the fact that children started working from home more than before, and subjectively felt the demands were greater,” adds Baďura.

Czech children spent much time online during spring 2020, not only because of fulfilling school duties in distance education. Much of their time behind the screens was also spent playing computer games. Boys spent an average of 3 hours a day playing them, while girls played significantly less – 1 hour and 10 minutes a day. Girls, on the other hand, spent more time than boys on social networks (girls 2:44 hours, boys 1:55 hours). Young Czechs also spent quite a lot of time during the quarantine watching movies and videos – an average of 2 hours and 45 minutes a day; the groups of boys and girls have the same score here.

Schoolchildren showed that they had good awareness of the pandemic. More than 85% of them considered information dealing with the health aspects of spreading coronavirus to be sufficient, which is in stark contrast to the findings concerning health literacy, which is generally rather poor, as recently found by the same team of researchers. Research team analyst Baďura attributes this mainly to the strong influence of media content. “If more than 85% of children say that they had enough information about coronavirus, it does not mean that they had correct, verified information, or that they were able to actively process it. This information probably indicates that the public space was completely saturated with such information, and that children perceived it strongly,” he says.

The authors of the study hope that the results of the spring survey will find their application elsewhere, too. This is one of the reasons why researchers offer the collected data to those experts who would like to further work with them – for example, to publish the data or use it to make adjustments to crisis strategies at the national, regional, or local level. Those interested can request data HERE.

The Palacký University Olomouc team has been monitoring and commenting on factors influencing the health of Czech schoolchildren aged 11, 13, and 15 years via the HBSC (Health Behaviour in School-aged Children study). The study is meant to comprehensively map the lifestyle of the young generation. Current research uses the long-established methodology of the HBSC study; due to the present situation it also focussed on the period of school closure during the pandemic. The research project was supported by the Czech Science Foundation (GACR) under Reg. No. 20-25019S.