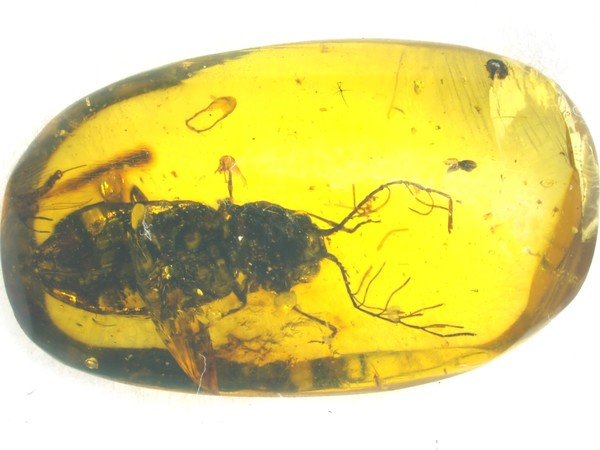 A unique overview of the global diversity of fossil click beetles, which will help to clarify the origin and evolution of this diverse and globally widespread group of beetles, has been published by scientists led by Robin Kundrata of the Department of Zoology at the Faculty of Science. Their comprehensive work will serve as a basic source of information for further studies focused on click beetles. The resulting publication was published in the international professional journal Insects.

The Elateridae family currently contains over 10,000 described species from around the world. However, insufficient knowledge of the fossil record has so far prevented scientists from understanding the origin, evolution, and paleodiversity of this interesting group of beetles. Therefore, Robin Kundrata, together with his two students and a colleague from Moscow, decided to summarise and publish all available information about all the world’s fossil click beetles, which covers the entire period of their evolution. The researchers found that the diversity of fossil click beetles described so far includes 261 species classified into 99 genera from nine subfamilies.

“The available data clearly show that the vast majority of the species described urgently need a detailed revision of their systematic classification, with many compression fossils in particular not providing enough important morphological features to be properly classified,” said Kundrata.

The oldest fossil click beetles date back to the Triassic period, but since in most of these cases only the elytra or their fragments have been preserved, it cannot be said with certainty that in all cases they are really click beetles. “Over 100 species of click beetles are already known from the Jurassic period, but even here it is possible that a large percentage of them belong to other, morphologically similar families. On the other hand, we have many undescribed species, not only from the Mesozoic, so there is still plenty of work ahead of us,” said Kundrata.

Students of teacher training in biology Gabriela Pačková and Johana Hoffmannová are also taking part in the research of the fossil record of click beetles under the guidance of Robin Kundrata. “It’s a great feeling when you work on something for a long time and then you see the result of your work, especially the reception of the professional public,” said Pačková, who chose extinct click beetles as the topic of her Bachelor’s thesis. “In addition, it’s amazing to work on researching millions of year-old beetles, many of whom inhabited the planet along with the dinosaurs,” said Hoffmannová. Earlier, she already participated in the description of a unique click beetle embedded in Baltic amber.

“It is a pleasure for me to work with such motivated students. Although I already consider Johana and Gabriela as my colleagues rather than students. Maybe it’s also because we are all in almost daily contact because of many projects, even though we have now been forced to limit personal meetings due to covid,” said Kundrata.

Both students are not focused only on fossils, but also study the current diversity of click beetles. Gabriela Pačková was the first author of a study in which she named a new species of soft-bodied click beetle from Sri Lanka in honour of her late mother. Johana Hoffmannová won the Rector’s Award for the best student scientific work this year. She made an impression with her first-author publication on two systematically interesting Australian families of click beetles.