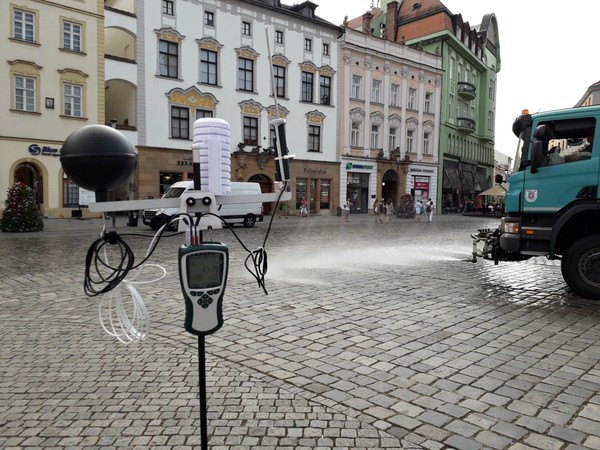 A unique “temperature feeling” map of Olomouc is being prepared by experts from the Palacký University Faculty of Science, who, thanks to this research, will help to propose effective measures to reduce heat stress in the city during hot summer days. Residents and visitors to the city will also take part in the summer research. With their help, the scientists will identify the locations where people are most often exposed to stress from excessive heat. The results of the research, including a temperature feeling map, will be available in early 2021.

“We use a modern method of participatory mapping for the research. The aim of the study is to analyse the locational preferences of residents and visitors to the city during hot summer days and to identify localities that they consider inhospitable during these days. At the same time, we will evaluate the measures preferred by the population in terms of reducing said heat stress,” described Michal Lehnert from the Department of Geography of the Faculty of Science about the research.

The temperature feeling map of Olomouc builds on previous research involving the cities of Brno, Ostrava and Pilsen. Based on spatial analysis of local climatic conditions, scientists from the UP FS Department of Geography and the Global Change Research Institute of the Czech Academy of Sciences compiled results that enable the identification of localities threatening heat stress. The results were then passed on to the cooperating cities. The results of the research so far show that high temperatures prevail in Olomouc during the day – for example, in the area in front of the main railway station, in the streets Tovární and tř. Svobody and on the squares in the historic city centre. On the contrary, at night, high temperatures are maintained in the narrow streets of the historic centre, which have poor airflow and cool slowly.

“On top of the physical level, which we have previously studied, such as the bioclimatic conditions to which an individual is exposed, current approaches to assessing heat stress also emphasize the role of physiological and psychological factors and their interaction,” Lehnert explained, regarding the involvement of the city’s inhabitants in the next phase of research: the creation of the temperature feeling map. Researchers need to get information from about a thousand inhabitants and visitors of Olomouc. So far, more than 200 respondents have joined the project.

The results of the research will not only be used for scientific purposes, but will also be handed over to the Olomouc municipality. “The results can then contribute to the implementation of effective adaptation measures,” stressed Lehnert. “Public participation in the development of public spaces is very important for the quality of life in the city,” concluded Jiří Pánek from the Department of Development & Environmental Studies, which is co-developing the PocitoveMapy.cz portal, on which it is possible to fill out a questionnaire on the temperature feeling map of Olomouc.