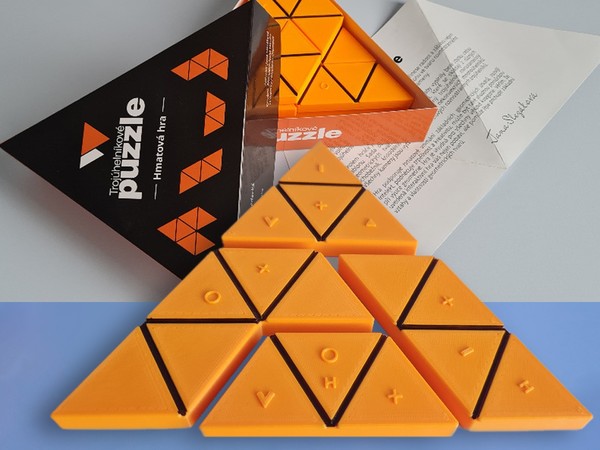 A new tactile game called Triangle Puzzle, prepared by experts from the Department of Experimental Physics at the Faculty of Science, Palacký University Olomouc, will help blind and visually-impaired children better understand the basic rules of geometry. The game can also be used as an aid in teaching geometry in primary schools and lower grades of grammar schools. The Department of Experimental Physics has already started serial production on its 3D printers.

“Our geometry game is primarily intended for children with visual impairments, for whom it is very important to encourage and support geometry in educational activities. This is because it is usually very difficult for blind children to deal with space and its laws. Also, their teachers and educators often neglect geometry among school subjects and consider it an impossible challenge,” said Jana Slezáková from the Department of Experimental Physics of the UP Faculty of Science, who is the creator of the tactile game.

The Triangle Puzzle contains a basic template in the shape of an equilateral triangle, into which three or four smaller modules are inserted without overlapping. The player’s task is to place the selected modules so that they fill the entire template without overlapping. The set contains a total of 11 modules consisting of different geometric shapes. The puzzle can be classified as a group of games with geometric themes that serve to develop spatial and geometric imagination, imaginative thinking, estimation, orientation in two and three dimensions, creativity and combinatorial thinking. The game also teaches pupils tactics and strategic thinking.

“The Triangle Puzzle is therefore a suitable addition to geometry education, as it supports the development of manipulative activities, develops geometric and combinatorial thinking, and aids and stimulates creativity,” said Slezáková. The tactile game will enable both non-disabled pupils and schoolchildren with special educational needs to better understand the basic relationships and properties of geometric figures in a plane.

The tactile game is produced using 3D printers at the Department of Experimental Physics of the Faculty of Science and consists of thirteen pieces. “Due to the small volume of the order and the high variability of production, this procedure was chosen. The biggest advantage is that the printed parts can be modified at any time according to the needs of the customer, who can choose the size of the tactile points or the colour. For the purposes of partially-sighted people, the frame is printed in black, the rest in bright orange. But nothing prevents having each piece created in a different colour,” added Martin Ochmann from the Department of Experimental Physics.

The new game was consulted with the chairman of the regional branch of the United Organization of the Blind and Partially Sighted in Olomouc (SONS), Jan Příborský, who tested the Triangle Puzzle as a blind person. In his opinion, the game supports logical thinking, spatial imagination, and dexterity. SONS and Tyflopomůcky Olomouc shops showed interest in the tactile puzzle. According to the head of Tyflopomůcky Olomouc, Jindřiška Dvorská, it is not only a game, as the Triangle Puzzle serves well for practicing touch and fine motor skills. She is therefore convinced that the game will appeal to clients of various age groups.

Jana Slezáková, has long been involved in the didactics of mathematics, the issue of spatial and planar imagination of pupils aged 11 to 16, and solving geometric problems without calculation. Triangle Puzzle is her second game. “I would like to thank my colleague Libor Machala for his support, and the opportunity to realize the production of the tactile game directly at the Department of Experimental Physics. Without him, my project would not have been possible,” added Slezáková.