Function of a gene important for seed development deciphered 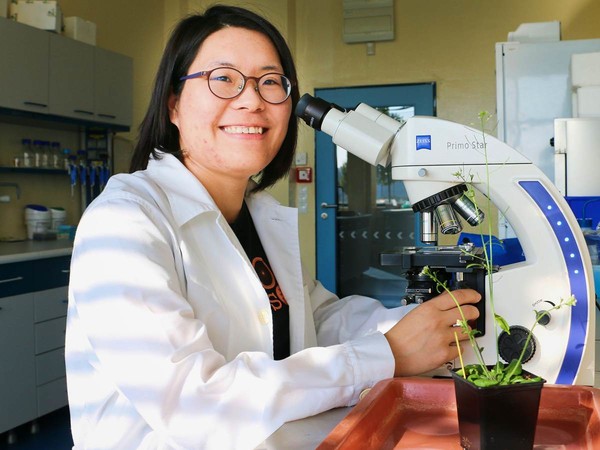 Scientists from the Institute of Experimental Botany, Academy of Sciences of Czech Republic (IEB ASCR) in Olomouc have become the first in the world to unravel the function of a newly discovered gene that influences seed production and quality.  The discovery may help in breeding better and more resistant agricultural crops. Spanish experts from the Complutense University of Madrid were also involved in the research, which is reported in the prestigious journal Plant Cell.

The scientific group from the Centre for Structural and Functional Genomics of Plants of IEB ASCR, which is part of the Centre of the Region Haná for Agricultural and Biotechnological Research, under the leadership of Aleš Pečinka, followed up on their earlier research on one of the protein SMC complexes involved in the storage of chromosomes in the cell nucleus. Back then, the Olomouc scientists had already discovered a gene in Arabidopsis thaliana that is related to seed formation. Now, after two more years of research, they have been able to precisely describe the process that is necessary for the formation of high-quality and viable seeds.

"We first tried to find out if the disposition for poor seed development is inherited from both parents or just one of them. We were surprised to find that only the paternal side produces the defective seeds, so it is only the paternal hereditary information that causes them. This led us to the next step, a detailed study of pollen grains. We found that the plants we studied do not form regular oval and uniformly sized pollen grains, but instead very diverse pollen grains, ranging from quite small to very large," explained Fen Yang from the research team.

Subsequently, the researchers began to investigate reductive cell division, called meiosis. It was then that extremely interesting and groundbreaking results emerged.

"It turned out that during cell division, errors and skips of certain processes took place. The result was that about a third of the new germ cells acquired ten paternal chromosomes instead of the usual five, and the pollen grains containing them were therefore much larger. If an egg was fertilized, the produced embryo had two copies of the paternal hereditary information instead of one. We found that such a seed usually never developed at all. If it did, it was abnormally large and did not form storage substances," said Aleš Pečinka.

This new information has exceeded all expectations and will have a major impact on agricultural practice, according to Jaroslav Doležel, head of the laboratory and winner of the Czech government's National Award "Česká hlava".

"We have deepened our knowledge of the functioning of the SMC 5/6 protein complex, which is now receiving a lot of attention in the world. Thanks to this discovery, we can much better understand the mechanism responsible for the reductive cell division, which directly affects seed production. This is a very important process for breeders and farmers, which they now have the opportunity to influence.  The study of this interesting gene can thus contribute to the creation of new crop varieties with higher yields," explained Doležel.

The Olomouc scientists will continue their research.  According to Aleš Pečinka, they want to find out why reductive division does not take place. "So far, we have assumed that a disrupted organization of the filaments that pull chromosomes or sister chromatids to opposite poles of the cell could be to blame. Another possibility is that the chromosomes are dividing very slowly, so the cell decides to proceed to the next step without the division occurring. These are just our hypotheses which we will now be testing," he added.

Scientists and breeders around the world can start using the new scientific findings from Olomouc now. They can for example start to check whether this mechanism works in other plants and animals.