Indonesian Studies at UP strengthen cooperation with Universitas Airlangga 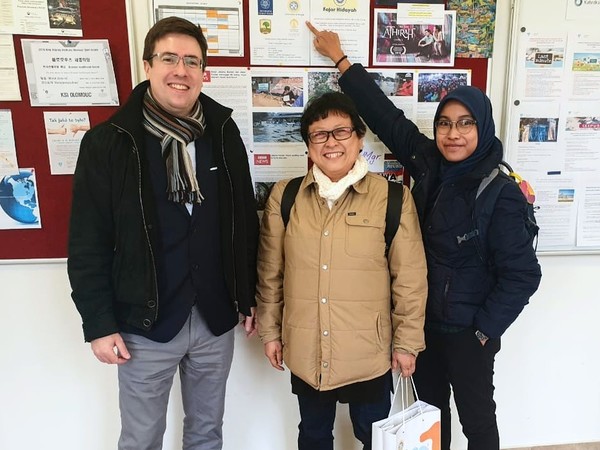 Palacký University Olomouc was visited by a delegation of its partner institution, Universitas Airlangga, from Indonesia. During the short visit, both sides agreed to strengthen their mutual activities. Thanks to their cooperation that has been running smoothly for years, the UP Faculty of Arts will probably be the first in Europe where an “Indonesian Corner” will be established.

Toetik Koesbardiati and Afifah Rahmania of the Universitas Airlangga Faculty of Social and Political Sciences, located in Surabaya, a city of nine million in East Java, met with Ondřej Pokorný, Head of the Indonesian Studies for Tourism programme (IST) at UP. This was the first ever visit from Universitas Airlangga to Palacký University.

“After a tour of the university premises, classrooms, and facilities, Prof Toetik Koesbardiati thanked us for the invitation to Olomouc. At the same time, she expressed satisfaction with the ongoing forms of cooperation, which include one-semester stays of our selected students at Universitas Airlangga,” said Pokorný, who visited Universitas Airlangga last November. He added that both sides agreed to strengthen their mutual activities, especially in the area of internationalisation – in student and academic mobilities. According to him, both universities want to strengthen student exchanges in degree programmes, which offer a wide range of study opportunities at both schools.

Due to the smooth cooperation, Universitas Airlangga has decided to offer Palacký University the establishment of the first “Indonesian Corner” in Europe. It would be a place where UP students will be able to learn not only about Indonesia, but also about study and internship opportunities in the country. According to Prof Koesbardiati, these activities have so far been limited to Asia, especially to the countries of ASEAN (Association of Southeast Asian Nations) and Taiwan. “Now it's Europe. We perceive Palacký University as a strong, stable, and strategic partner in the context of all European Union countries,” she said.

Universitas Airlangga is in a position similar to Palacký University. According to Pokorný, it is not the largest nor oldest university in the country, but thanks to great efforts, its scientific performance as well as its internationalisation activities are improving every year. “Universitas Airlangga is currently one of the three most prestigious universities in Indonesia, and collaboration with such an ambitious institution is always beneficial for us. At the same time, I am glad that student mobility will continue. Their offer to establish the Indonesian Corner may be seen as an appreciation of our attitude and academic success in Indonesian studies,” he added.