New issue of UP Žurnál magazine in English 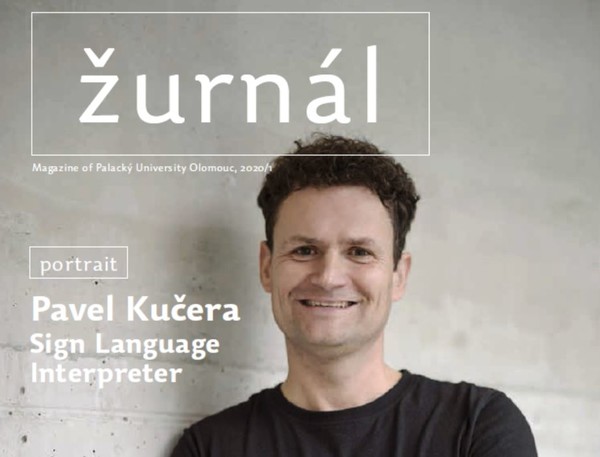 A smiling face from the UP Faculty of Education greets readers from the cover of the new UP Žurnál in English. Pavel Kučera, a sign language interpreter, is actually an icon for the entire issue of the magazine, which shows a “different dimension” of UP academics and students, acquainting readers with their scope of interests and activities. This issue also commemorates the 30th anniversary of the fall of communism in 1989, showing the transformations at the university over the past three decades.

Ever since I interviewed a man from the Faculty of Science, who enticed me into a world, which according to him, “is easy to orient oneself”, i.e. the world of mathematics, the close of our interview has been keeping me up nights. Marek Jukl is not only a mathematician and assistant professor at the Faculty of Science, he is also president of an organisation which has about the same number of members as the Czech army. He’s the head of the Czech Red Cross, and so our interview was partly about maths, but mostly about humanitarian aims. And why have I been losing sleep? His answer to my last question, about if we’ll ever see a time when wars will be over: “It would be difficult to say whether there will ever be lasting peace on Earth. But even if it never comes to pass, the attempts of the Red Cross to “humanise” war – though it may seem like an oxymoron – will not have been in vain. I’m convinced of that,” said Jukl, President of the Czech Red Cross.

“He has clever hands. They can not only sew trousers, those hands are also making him a living by interpreting,” begins the article in the Portrait section, in which we introduce readers to Pavel Kučera. Perhaps you already know him from the Facebook pages of the Faculty of Education, or perhaps from the videos this dynamic person makes. In this interesting Portrait you will read not only how he managed his own hearing challenges, but also what he is doing today in addition to everything else: e.g. teaching courses for entire families, teaching at summer schools, and interpreting at weddings.

And you’ll find out what UP scientists are up to at the moment. For example, an article about the success of the international team which has just decoded the pea genome, in which the UP team under Prof Jaroslav Doležel of the Olomouc laboratory of the Institute of Experimental Botany of the Czech Academy of Sciences, part of the Centre of the Region Haná for Biotechnological Research, played a significant role.

Of course, UP can pride itself on its students, too. And if anyone were ever to be in doubt of that, get to know Anna Víšková of the Sts Cyril and Methodius Faculty of Theology, whose project was supported by the UP Endowment Fund, or the travel experiences of Karolína Nováková from the Faculty of Physical Culture, or the talented team from the Faculty of Health Sciences who are winning rescue competitions.

But there’s a whole lot more, so pick up the year’s first issue of the UP Žurnál in English.

Download your free issue of UP Žurnál for free.