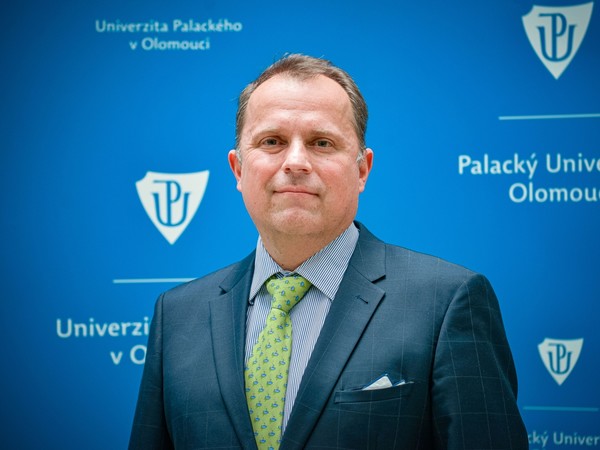 Martin Procházka, the current dean of the UP Faculty of Health Sciences, has been elected new UP rector.
Photo: Vojtěch Duda
Wednesday 31 March 2021, 17:19 – Text: (red)

The new rector of Palacký University Olomouc will be Prof Martin Procházka, M.D., the current dean of the UP Faculty of Health Sciences. The UP Academic Senate made this decision on the last day of March. Once the President of the Czech Republic signs his appointment decree, Prof Martin Procházka will lead the university for the next four years, from May 2021 to April 2025.

Four academics vied to receive the votes of twenty-four senators: Martin Kudláček from the Faculty of Physical Education, Jiří Lach from the Faculty of Arts, Tomáš Opatrný from the Faculty of Science, and Martin Procházka. Before the election itself, the candidates introduced their visions concerning the direction of UP in the years to come and answered the questions of the senators. The senators then voted in a secret ballot.

“I cannot remember a more solemn moment in my professional life, perhaps my graduation at the Faculty of Medicine. I would like to thank my three opponents. I think we have shown, through factual discussion, that our university is a cultivated environment and that we can communicate with each other even when we have opposing views and different goals. Many thanks also to the senators for the election, which ran smoothly, without tension or invectives. I would like to express gratitude to the current rector Jaroslav Miller and his administration for all the work they have done for the university. I’d also like to thank the entire academic community for participating in the event and related debates at the university. And last but not least, I must thank my family for their support,” said Martin Procházka in his thank-you speech after the result of the secret ballot was announced.

“I can promise to be the rector not only of the two faculties where I have worked, but also of the entire university. I promise to abide by everything that has been said in the election debates – my door will be always open to you; I offer free discussion forums, transparency, and communication. Starting tomorrow, I will be working for the university with my team and together with the UP Academic Senate I believe that four years from now I could hand it over to a successor, confident that I have done a good job,” Procházka added.

“I believe that during this tough election campaign our university has shown that it is worth fighting for; I also believe that our Academic Senate has shown during its term of office that it will fight for the university, and I believe that not only the newly elected rector, but we, all of us, will fight for it together,” said the chair of the UP Academic Senate, Michal Malacka, after the election. Malacka also pointed out that the Senate’s decision only proposes the future rector for appointment to be decided by the president of the country. The result of the election and the proceedings from the election of the candidate for the office of UP Rector, including materials required for the appointment, will be submitted by the UP Academic Senate chair to the Minister of Education by 7 April.

“Congratulations to the future rector for his successful election and great personal success! I know Prof Procházka as a prudent colleague; the university will undoubtedly continue to thrive under his leadership. In recent years, UP has dynamically developed in all areas, which had a positive effect on the international rating of our university. I am sure that UP will maintain this dynamic course and continue to take this path of success,” stated current rector Jaroslav Miller to his successor.

In the modern era after its reinstatement in 1946, Palacký University has been headed by fourteen rectors, two of which were female. Martin Procházka will be number fifteen. Currently, UP has more than 22,000 students at eight faculties and almost 4,000 employees. This oldest Moravian university elected a new rector after Jaroslav Miller submitted his resignation at the end of the year.

A graduate of the Palacký University Faculty of Medicine and Dentistry, Professor of Gynaecology and Obstetrics. Since 1994 he has worked at the Department of Obstetrics and Gynaecology at the UP Faculty of Medicine and Dentistry and University Hospital Olomouc. Previously, he also headed the Department of Midwifery at the UP Faculty of Health Sciences. In his professional work he has focussed on perinatology, maternal-foetal medicine, and medical genetics, especially on serious complications during pregnancy or inherited disorders of blood clotting. As a physician, he specialises in high-risk pregnancies, thrombophilic conditions, outpatient gynaecology, prenatal care, infertility, and endometriosis. He gained professional experience during study stays and internships in Belgium, Sweden, and the Netherlands. According to the Web of Science database, he has authored 119 works with more than 500 citations. He is a member of the committee of the Czech Gynecological and Obstetrical Society, and a member of the Czech Society of Medical Genetics and Genomics and several other European and international professional associations.