New Varieties of a Plant Beneficial to Liver Cultivated in Olomouc 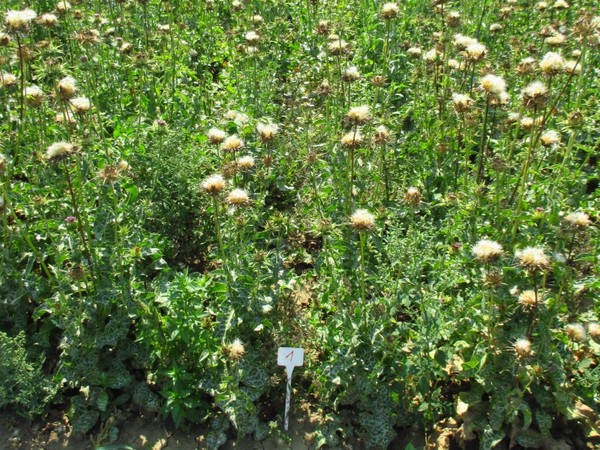 Three new varieties of Silybum marianum or milk thistle, often used by people with liver disorders, have been cultivated in the Centre of the Region Haná for Biotechnological and Agricultural Research in Olomouc, together with the company Teva Czech Industries. The new cultivars with varied content of active compounds – flavonoligans – were created on demand of the company for use in their pharmaceutical programme.

“The strains are grown for their extract, which is added to preparations for regeneration of liver cells. These are used as a supporting treatment for patients with liver disorders such as cirrhosis. The cultivars were created in collaboration with a commercial partner; our inventor’s share is 25% in one of them and 50% in the other two,” said the main investigator, Radoslav Koprna.

Cultivation of new varieties usually takes ten years. This time however researchers did not have to start from scratch, since they received sufficiently variable and partially processed material from the pharmaceutical company. Nonetheless, thousands of plants went through their hands during the six years of work. And since this plant in the Asteraceae family is thorny, work was often unpleasant.

“Last year, we registered a new strain called Tevasil, while this year, two new strains were registered – Albus, and one with the proposed name Tevadian. Each strain is specific, they vary in the content of the complex of active compounds as well as in the length of their vegetation period,” explained Koprna. Tevasil has a high content of silymarin in the seed, while Albus has a high silymarin content and is characterised by its rapid fruition and the white colour of its flowers. Tevadian, on the other hand, has a high content of silydianin, to the detriment of silybin.

The cultivation of new varieties is not a novelty for the researcher from Olomouc; he also lectures on the subject at the UP Faculty of Science. In the past, he had cultivated three varieties of rape plant in a research institute in Opava. “I gladly accepted the offer to cultivate new varieties of milk thistle. The company provided the starting genetic resources, we used them and added our expertise. The development of these varieties is an ideal example of close collaboration between the academic and commercial sectors,” added Koprna.

Another outcome of their collaboration has been the development of the technology for growing milk thistle, including the extension of the permission to use specific pesticides on this plant. Thanks to this project, the growth technology of Silybum marianum has been fully completed, including the specific use of herbicides and pesticides.

Silybum marianum originated from the Mediterranean region, northeast Africa, Asia Minor and Western Asia. Its common names are blessed milk thistle, Marian thistle, Saint Mary's thistle, Scotch thistle and others. It is grown solely for pharmaceutical purposes. The Centre of the Region Haná for Biotechnological and Agricultural Research brings together research teams from the UP Faculty of Science and the Olomouc branches of the Institute of Experimental Botany of the Czech Academy of Sciences and the Crop Research Institute.