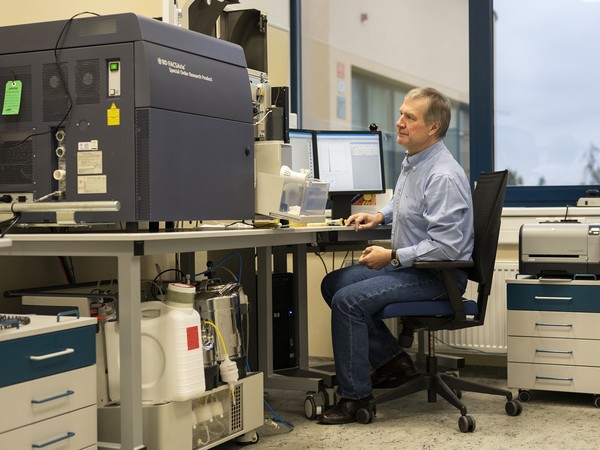 Scientists from the Olomouc laboratory of the Institute of Experimental Botany (IEB) at the Czech Academy of Sciences, which is part of the Centre of the Region Haná for Biotechnological and Agricultural Research (CRH), have achieved another success. They were part of an international team that has sequenced the common pea genome after six years. The findings have been published in the prestigious scientific journal Nature Genetics.

Sequencing the pea genome, which is one-third larger than the human genome, will contribute to breeding new varieties of this important crop. As a result, peas could be a cash crop in the Czech Republic once more.

“It opens up a whole new path to pea breeding because it will be possible to apply the latest methods of molecular biology and biotechnology. Personally, I see a certain symbolism in this work, in relation to the legacy of the founder of genetics, J.G. Mendel, who studied in Olomouc and who discovered the laws of inheritance in Brno thanks to studying peas. I have no doubt that he would be very pleased with our work, and I hope that we have helped to make the pea a widespread crop again,” said Jaroslav Doležel, the head of the laboratory and Scientific Director of CRH.

Scientists have revealed what the ancestor of the pea looked like

It took six years to decode the pea genome, and it required the collaboration of laboratories from all over the world, associated in the International Pea Genome Consortium. The project was coordinated by the French National Institute for Agricultural Research in Dijon, led by Judith Burstin. Olomouc scientists participated in the research in two ways. By means of using unique technologies of genome optical mapping and chromosome sorting, they contributed significantly to improving the assembled text of hereditary information. The method of chromosome sorting was developed by the IEB laboratory in Olomouc, which is still the only workplace in the world that uses this method routinely. The same technology was used by experts to investigate the differences between the structure of hereditary information in cultivated peas and its wild relatives. The outcome of the project is fascinating. They have been able to reveal how the evolutionary information of the pea evolved during the evolution from their common ancestor existing 50 million years ago to today. The detailed knowledge of hereditary information will make it easier for breeders to produce new pea cultivars resistant to fungal and viral diseases and having better nutritional quality.

Superfood of our ancestors

Although peas are traditionally grown legumes, it is a slightly overlooked crop in the Czech Republic; it is grown only on less than 75,000 acres. This is because the current varieties of peas are somewhat problematic for farmers, so it is economically more advantageous for them to grow other crops.

The pea is an important source of plant proteins. Its cultivation does not burden the environment as much as livestock breeding, from which we obtain animal proteins. A big advantage of the pea, as well as other plants of the bean family, is that it is able to fix atmospheric nitrogen and improve soil quality. And last but not least, peas are also a great, healthy, and ecological alternative to soy, which is imported to the Czech Republic in large quantities.