Prince Charles writes introduction to book by heraldist Jiří Louda, in press at UP 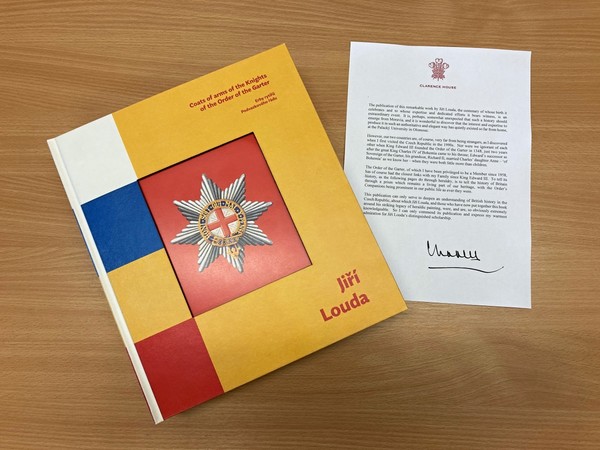 Palacký University Press has added another world-famous personality to its team. Charles, Prince of Wales, son of Elizabeth II, Queen of the United Kingdom of Great Britain and Northern Ireland, has written the introduction to a book by heraldist Jiří Louda, Coats of Arms of the Knights of the Order of the Garter, currently in press at UP.

The publication, with more than 600 pages, portrays one thousand illustrations of the coats of arms of the oldest European order of knighthood, and the third most important British decoration. It will arrive at bookshops in autumn as a tribute to the centenary of the birth of Jiří Louda, the renowned heraldist, and also the author of the Czech national insignia.

The book Jiří Louda: Erby rytířů Podvazkového řádu / Coats of Arms of the Knights of the Order of the Garter will be published in a bilingual English-Czech edition under the auspices of UP Rector Jaroslav Miller. “The Most Noble Order of the Garter was founded in 1348 by Edward III. The Order is headed by the Queen, and Prince Charles is a member. This is why we approached the Royal Family. UP Vice-Rector Jitka Ulrichová was instrumental in arranging a meeting with Otakar Fojt, who works at the UK Embassy in Prague as a scientific diplomat and is also the chair of the UP Board of Trustees. We asked him for advice, and he pre-negotiated with the British Ambassador to the Czech Republic, His Excellency Nick Archer, former secretary to Prince Charles, so that we could present the book to him,” said UP Press director Aleš Prstek.

Once the opportunity to introduce the book to Prince Charles arose, a flurry of activity began. “With great effort on our part we quickly prepared a facsimile of the book including translations of the biographical portions. We put it together in house, with a stretched canvas binding. We personally delivered the copy to the embassy with a letter of introduction. A few days ago, we got back a positive answer, which greatly pleased us. The ambassador brought a letter signed by Prince Charles which we would be allowed to publish in the book unedited as an introduction,” the UP Press director added.

Prince Charles: “Publication of this remarkable book by Jiří Louda, the centenary of whose birth it celebrates and to whose expertise and dedicated efforts it bears witness, is an extraordinary event. It is, perhaps, somewhat unexpected that such a history should emerge from Moravia, and it is wonderful to discover that the interest and expertise to produce it in such an authoritative and elegant way has quietly existed so far from home, at Palacký University Olomouc. (…) This publication can only serve to deepen an understanding of British history in the Czech Republic, about which Jiří Louda, and those who have now put together this book around his striking legacy of heraldic painting, were, and are, so obviously extremely knowledgeable. So I can only commend its publication and express my warmest admiration for Jiří Louda’s distinguished scholarship.”

Quote from the letter which will form the book’s introduction.

Jiří Louda considered Coats of Arms of the Knights of the Order of the Garter as his masterpiece, working on it almost up until his death in 2015. Louda was a heraldist who got to know Britain and its traditions personally during WW2, when he left his home country for Great Britain, where he graduated from officer’s school and became a parachutist, to join the war effort from abroad. Injuries incurred during training prevented him from becoming part of the parachutist units who were dropped back into their homelands during the Protectorate. Instead, he served as a radio operator, including communicating with rebel radio operators during the Prague Uprising. After the war, he returned to Czechoslovakia and became a professional soldier. He worked as an artillery instructor at the military training grounds in Olomouc until 1947, when like other Czechs who fought for their country in exile, he was turned out of the army, and later even arrested and imprisoned on ideological grounds. In 1968, Jiří Louda was reinstated into the military and promoted to the rank major; in 1991 to retired lieutenant. In 2004, he was given an honorary doctorate by UP.

The book, which will be handsomely printed and will also introduce the life and times of Jiří Louda, is being prepared by a team of authors. Michal Šimůnek, of the Institute for Contemporary History at the Czech Academy of Sciences, who has long been interested in the fate of the father and son Zdeněk and Jiří Louda, is one. The author and editor of the heraldic portion of the book is Karel Müller, a friend and colleague of Jiří Louda, also a graduate of UP, a historian, archivist, heraldist, and Director of the Regional Archive in Opava. Radim Měsíc, the book's designer, is another UP graduate. Scanning and colour correction of Louda's original illustrations and pre-print of the publication were conducted under the able eyes of long-time technical editor at UP Press, Jiří K. Jureček.

The book will be published this autumn in time for Jiří Louda's centennial, accompanied by an exhibition at the Olomouc Regional Museum, which houses Louda's original illustrations in its collections. For more details on the book, see louda.upol.cz/english/.