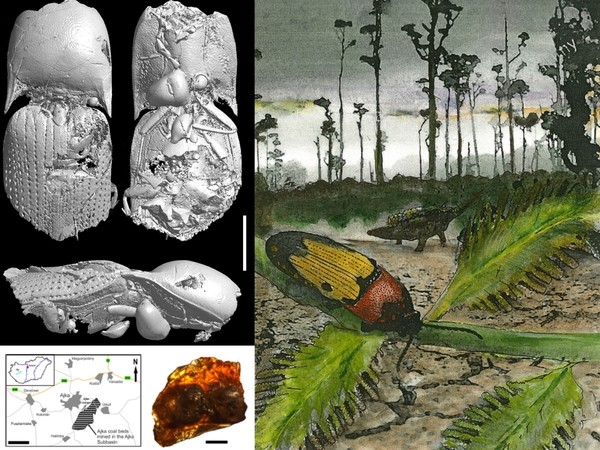 The first fossil beetle hidden in tens-of-millions-year-old Hungarian amber has been described by an international team of scientists, including Robin Kundrata from the Department of Zoology at the UP Faculty of Science. Using modern computed tomography, the experts reconstructed the appearance of this unique specimen and classified it as a click beetle. The results of the study, which has significantly contributed to the knowledge of the Mesozoic fauna of Central Europe, were published in the prestigious scientific journal Scientific Reports.

An international team of experts from Hungary, the Czech Republic, and Russia investigated the detailed morphology of an approximately five-millimetre-long fragment of a beetle from the Elateridae family, which was concealed in amber found near the town of Ajka in western Hungary. The local amber is called ajkait, after its location. “Our discovery brings several firsts. Not only is it the first beetle ever described in ajkait, but it is also the first described fossil beetle from the territory of present-day Hungary and the first described Mesozoic click beetle from mainland Europe,” said Kundrata, who specialises in click beetles, when explaining the importance of the discovery.

Unfortunately, the beetle was not preserved complete in the amber. Nevertheless, scientists were able to systematically classify it using the information obtained on the basis of the successful reconstruction of its morphology. Since it was a completely new genus and species, it was named Ajkaelater merkli. The name was chosen in honour of the town of Ajka and the former long-time curator of the Hungarian Museum of Natural History, Dr Ottó Merkl, who died unexpectedly at the beginning of 2021. “As far as the generic name was concerned, we had various ideas, but it was clear from the beginning that the beetle would get its species name after Dr Merkl. He was not only a great and respected person, but also one of the most important figures in Hungarian entomology,” explained Kundrata.

Scientists believe that Ajkaelater was, like its likely relatives today, dependant on wood for its development. This theory presumes a wooded and more or less swampy ecosystem which, according to evidence, was present in the Late Cretaceous period around the present-day city of Ajka.

Mesozoic amber, a fossilised resin, is found in sites all over the world. However, only a few sites, such as those in Myanmar, Lebanon, Spain, and France, are known to contain larger quantities of fossils embedded in amber. In Hungary, Mesozoic amber is found mainly in a former brown coal mining site near the town of Ajka in the western part of the country. “It is estimated to be about 85 million years old. It was formed during the Cretaceous period when dinosaurs still ruled the planet. However, it was always considered a mere by-product of coal mining, which is perhaps why we only have about 1,500 pieces today, of which only about a hundred harbour animal fossils. Moreover, these are very small pieces, so they only contain smaller arthropods, particularly insects," explained Márton Szabó from the Hungarian Museum of Natural History.

The Hungarian ajkait differs significantly from the much better known but much younger Baltic amber from the Tertiary period. Ajkait is mostly cloudy and opaque, so scientists have studied its contents only marginally. This has changed, however, with the advent of modern methods. “Today, we can scan individual pieces of amber we find using X-ray computed microtomography, which allows for efficient 3D reconstruction of the morphology of the amber inclusions,” concluded Kundrata, the study’s second principal as well as corresponding author. He also participated in the research with student Johana Hoffmannová.