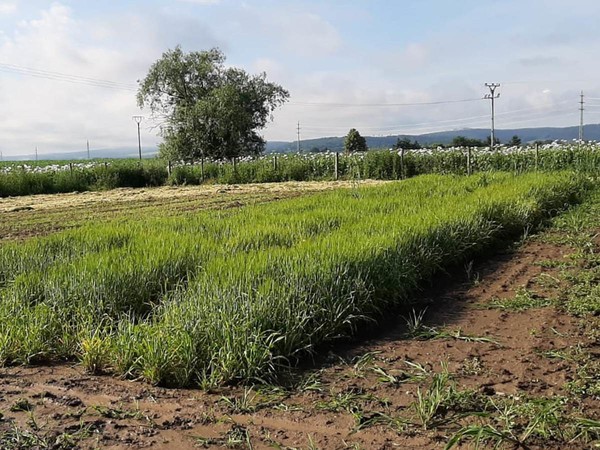 Scientists from the Czech Advanced Technologies and Research Institute – CATRIN of Palacký University in cooperation with a private company have tested the technology for producing antimicrobial peptide cathelicidin in the grain of genetically modified barley under field conditions in three consecutive seasons. They demonstrated long-term stability of expression and heritability of the transgenes, which is an important prerequisite for commercialization of the method. In addition, compared to initial experiments, they significantly increased the yield of isolation of this antimicrobial peptide.

“Antimicrobial peptides play an important role in the immune system of many organisms and LL-37, as the only known member of the human cathelicidin family, is involved in antibacterial activity as well as various physiological responses. Our group has recently developed a procedure leading to the production of recombinant human LL-37 in barley grains. Since long-term stability of expression and heritability of the inserted gene is essential for successful commercialization of recombinant proteins, we had to demonstrate it. In the current project, we have observed stable inheritance and expression of the LL-37 gene in barley over six generations,” said Malihe Mirzaee, first author of the paper published in Antibiotics.

In addition, the scientists have optimized the method for producing cathelicidin, which acts as a natural antibiotic. As a result, they achieved significantly higher production of cathelicidin LL-37. “Moreover, the advanced generations of transgenic barley showed normal growth and the LL-37 produced retained its high antibacterial activity,” added Ivo Frébort, another author and head of the research group.

Barley (Hordeum vulgare L.) is one of the world’s most important cereals and can be grown in a wider range of climatic conditions than other cereals. The use of barley grains as a ‘bioreactor’ for the production of human pharmaceuticals has proven very convenient. “Barley grains provide an endotoxin-free environment with relatively low levels of secondary metabolites. Another advantage is that the barley grown is self-pollinating, which reduces the possibility of unwanted gene transfer to another variety,” Mirzaee explained.

The scientists now continue their research. They are currently focusing on a purification process that would contribute to the simple and economically viable production of antimicrobial peptides in barley. Cathelicidin is one of the most well-known antimicrobial peptides of the human skin and is part of its defense function against infectious microorganisms. It can disrupt the cell membrane of bacteria, thus preventing their multiplication. In medicine and cosmetics, it can be used, for example, to treat and promote healing of chronic wounds and skin diseases.