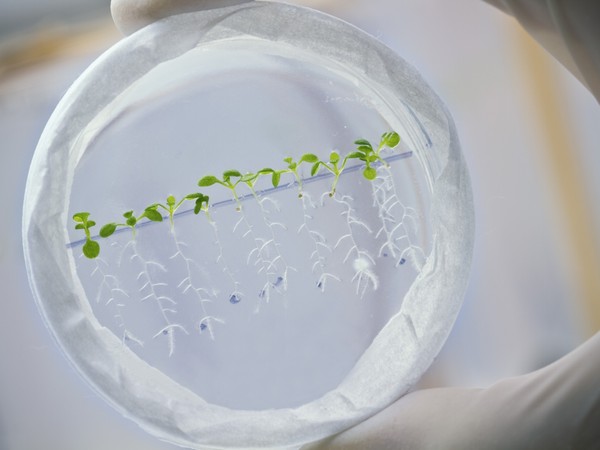 Olomouc scientists from the Institute of Experimental Botany of the Czech Academy of Sciences and the Centre of the Region Haná for Biotechnological and Agricultural Research in cooperation with their Swedish colleagues have developed a unique method which allows the measurement of a record 101 plant hormones and related compounds in one small sample from the root, stem, or other organ. The new method speeds the analysis of hormones and allows scientists to better understand how their levels change in various situations, for example when agricultural crops or other plants face unfavourable conditions.

Just like people, plants too have hormones – compounds in minute quantities which influence the physiological processes in organisms. They often play a bigger role in plants, regarding regulation of important processes. Biologists thus need to measure the concentration of all participating hormones, as well as the materials which the hormones create or process. In order to make such an extensive analysis easier, scientists attempt to create more effective detection methods. The new method discovered is the best yet, determining 101 plant hormones and related compounds.

“Our method is quick, sensitive, and reliably works on small plant samples of only 20 milligrams. We are able to detect up to 101 substances in each sample, which is almost twice the amount compared to the previous methods developed by other teams,” stated Ondřej Novák, who developed the method with the Olomouc team and colleagues from University of Agricultural Sciences in Umeå. “We make use of liquid chromatography-tandem mass spectrometry technology because it is ultra-sensitive and is able to precisely identify the compounds we’re interested in. The entire analysis takes only 32 minutes,” added another member of the Olomouc team, Jan Šimura.

Scientists validated the practical use of the method on thale cress (Arabidopsis thaliana) seedlings, when they induced salt stress. They found 43 endogenous compounds out of the above-mentioned 101 which the new method is able to determine. Salt stress influenced levels of 23 of these 43 compounds in roots and 15 in the above-ground shoots as compared to the control plants. Physiological reactions to salinity stress thus engage many various hormones. As was determined, the concentrations of several hormones increased or decreased in conjunction with the activity of genes responsible for their synthesis or degradation. Combining data on the reaction of genes and hormones to salinity stress or other stimuli thus provides a more complex idea of the processes which take place in the plant.

“Drought, frost and saline soils contribute to huge yearly losses in agriculture. Thus we’re trying to understand the biological events which lead to the activation of protective mechanisms making possible plant survival. We’re working on the analyses of hormones in various plants including agricultural crops, along with scientists from Czechia and the entire world. We will definitely make good use of our ‘101-method’ in these projects. And we have other future plans. We’d like to measure levels of plant hormones in different types of cells and also in individual parts of cells – organelles,” Novák revealed.

An article describing the newly-developed method has been published in the scientific journal Plant Physiology. The text is available on the journal’s website.

Associate Professor Novák is head of the Laboratory of Growth Regulators, which is a shared workplace of Palacký University and the Institute of Experimental Botany of the Czech Academy of Sciences, and is a component of the Centre of the Region Haná for Biotechnological and Agricultural Research.