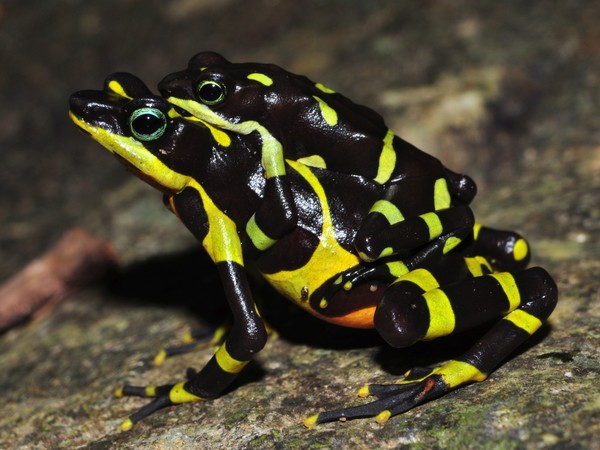 An as yet undescribed species of toad of the genus Atelopus was discovered during expeditions to inaccessible areas of the province of Darién in the eastern part of Panama by an international team of scientists, one of whose members was Milan Veselý from the Department of Zoology at the UP Faculty of Science. The report of their discovery was published in the prestigious journal Zoological Research. Toads of the genus Atelopus are among the most distinctive and remarkable groups of neotropical toads. At the same time, it is one of the most endangered groups of amphibians in the world, with a massive decline and even extinction in many populations over the last 20 years.

“We called the new species Atelopus fronterizo. The species moniker reflects the name given by indigenous peoples to someone who lives near the border. At the same time, however, they use this designation for members of the Panamanian border military police serving in Darién, who ensure security in this troubled part of Panama. Without the logistical support of this organisation, our research in some parts of Darién would be impossible,” said Veselý.

The habitat of the genus Atelopus extends from Costa Rica to Bolivia and currently includes 100 recognised species. Only six species occur in Panama, the last of which was described more than a quarter of a century ago. One of these species, the gold-coloured Atelopus zeteki, is not only the Panamanian national toad, but also an international symbol of the struggle to save amphibian populations in Latin America. “Given the ongoing deforestation, the destruction of native habitats and the ubiquitous chytrid fungus, it seemed unlikely that a hitherto undescribed species of these colourful and distinctive toads could still be found, which has not yet been discovered by herpetologists working in Panama. Nevertheless, during expeditions to inaccessible areas of Darién, we managed to discover several populations that were somewhat different in appearance from all the species described so far,” described Veselý.

Subsequent molecular analysis of the toad tissue samples showed that it was indeed a separate clade representing a new taxonomic unit. Researchers later found in a study of comparative material from world museums that this distinctive and colourful frog lay unnoticed by experts in the depositories of major museums for more than a hundred years. “This species was first found in 1911 near the settlement of Puerto Obaldía on the Panama-Colombian border by the naturalist Henri Pittier. This oldest known specimen stored in the United States National Museum was chosen by the herpetologist Dunn in 1931 as a paratype of the species Atelopus glyphus,” said Veselý.

Later finds of these toads turned out to be similar. Without much interest zoologists placed them in jars marked ‘Atelopus sp.’. “However, in an article published in 1990 by Cocroft et al. there is a mention of three male specimens, including a recording of their voices, which come from an older find by C.W. Myers in 1967. Toads were found in the settlement of Sasardí in the province of San Blas. Based on the bioacoustic analysis of the voice, the authors pointed out that these specimens may represent a hitherto undescribed species in the species complex Atelopus varius,” pointed out Veselý. In the last decade, some authors have presented this group of toads as Atelopus cf. limosus or Atelopus sp.

According to Veselý, it is no big surprise that the toads found were not accurately described for many decades. “Due to the large variability of colour patterns and morphometric features, it is very difficult to characterise the types of some species complexes in the genus Atelopus only on the basis of morphometry or colouration. Probably that is why this taxon remained undescribed for so long, although it was dealt with by the world’s leading herpetologists. Modern technologies, which are now used in integrative taxonomy, allow us to solve even such difficult taxonomic mysteries. Thanks to this, we managed to convincingly define the species not only molecularly, but also bioacoustically and morphologically,” said Veselý.

Currently, 97 percent of known species of toads of the genus Atelopus are classified as “endangered” (EN), “critically endangered” (CR) or “extinct” (EX) according to the IUCN Red List. “In the vast majority of identified cases, this widespread extinction was caused by chytridomycosis, which is a disease caused by the parasitic fungus Batrachochytrium dendrobatidis, which was discovered in Central America and is currently one of the causes of the global amphibian crisis,” said Veselý. From the genus Atelopus especially populations of toad species living at higher altitudes are being decimated by this disease. Of the Panamanian species, these include e.g. Atelopus zeteki, A. chiriquiensis, and A. varius.