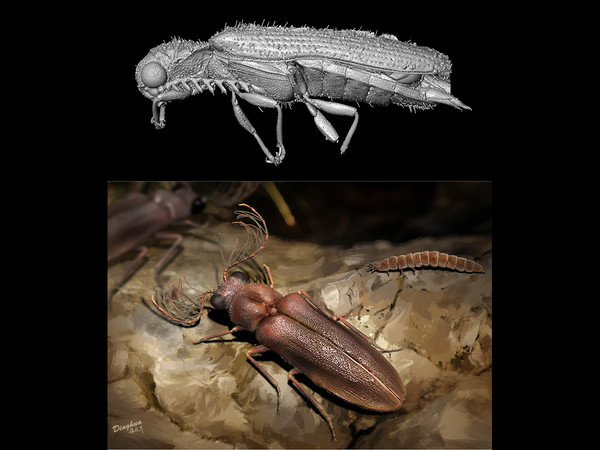 Tens of millions-years-old beetle lines have been discovered by international teams of scientists, one whose member was Robin Kundrata from the Department of Zoology, UP Faculty of Science, while studying fossils hidden in amber. In the laboratories, experts managed to reconstruct the appearance of a unique click beetle from Baltic amber and describe a completely new family of luminous beetles inhabiting the Earth alongside prehistoric dinosaurs.

The results of the studies were published in the prestigious scientific journals Scientific Reports and Proceedings of the Royal Society B: Biological Sciences.

In the first study, an international team of scientists led by Robin Kundrata dealt with a morphologically unique representative of the Elateridae (click beetles) family, preserved in Baltic amber. The age of this amber from northern Europe is estimated at 30 to 40 million years. “Our results show that this is a completely new genus and species belonging to a group whose current representatives occur mainly in southern South America, New Zealand, Australia and the eastern and southeastern parts of Asia. Thus, this discovery not only greatly modifies our knowledge of the biogeography of this systematically interesting group of click beetles, but also emphasises the importance of Baltic amber for our understanding of the composition of long-extinct forest ecosystems,” said Kundrata.

Beetles embedded in millions-year-old resin play a very important role among fossils. These are usually well-preserved individuals and thanks to their 3D structure, they can be compared relatively well with contemporary lines. However, a large number of amber fossils are in poor condition, and not all morphological features can be observed in some beetles. Cracks or bubbles of air in amber or inappropriate body position can make them difficult to study.

“Problems with suboptimally deposited fossil specimens can be solved using modern non-destructive technology – X-ray computational microtomography, which allows effective reconstruction of 3D morphology using specialised software,” said Kundrata. This was the method used in his study to reconstruct the morphology of the beetle from the family of Elateridae, hidden in Baltic amber for millions of years. “It is unbelievable how much can be read from a single fossil,” said Johana Hoffmann, a student of Kundrata’s, who also participated in the study with colleagues from Latvia and Russia.

A beetle “older” than Tyrannosaurus rex

In the second study, together with Robin Kundrata, scientists from China and Great Britain studied a unique luminous beetle. It was deposited in approximately 99 million-year-old Burmese amber, which is currently mined in northern Myanmar. This beetle, which lived during the dinosaur era and was even more than 30 million years “older” than the famous Tyrannosaurus rex, did not belong to any known family, so scientists have described for it a separate family: Cretophengodidae.

Unlike in the previous study, Cretophengodes, the scientific genus name of the newly discovered beetle, was extremely well preserved. As a result, the researchers better recognised many morphological details, including the bioluminescent organ on the abdomen. This new Mesolithic beetle belonged to the family Elateroidea, which includes e.g. strongly sclerotised click beetles or, conversely, soft-bodied fireflies. Closely related to Cretophengodes were fireflies and other small luminescent families Phengodidae and Rhagophthalmidae, but Cretophengodes was also characterised by a unique morphological structure. Its body was much more sclerotised. He thus represented a transitional form between these two extremes and also an important link for understanding the evolution of soft body formation in this group of beetles.

“Bioluminescence is thought to have arisen in the evolution of beetles in larvae as an antipredation strategy. It was only later that adults began to use it for gender communication. The discovery of a luminous adult male beetle in almost 100 million-year-old amber therefore significantly contributes to our knowledge of the early evolution of this phenomenon,” explained Kundrata.

Researchers speculate that the newly discovered beetle used fluorescence as a defence against insectivorous predators that experienced development during the Cretaceous period. The forms of larvae and adult females of this group remain unknown. However, since the females of today’s representatives of related families remain largely similar to larvae even in adulthood, are wingless and live a hidden way of life, the same is assumed for their extinct relatives.