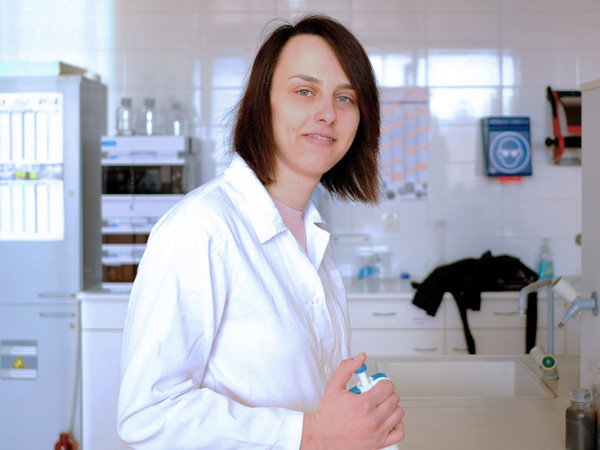 Silver nanoparticles, whose effectiveness in overcoming bacterial resistance has been confirmed in a study by a group of scientists from the Palacký University Olomouc (UP) Faculty of Science and the UP Faculty of Medicine and Dentistry Department of Microbiology, could restore the lost strength of antibiotics to fight resistant bacterial infections in the future. The results showed that the joint application of silver nanoparticles and antibiotics will reliably destroy even strains of bacteria that have managed to build up resistance to antibiotic drugs. The research results were published this year in the journal Scientific Reports.

Lucie Hochvaldová, David Panáček, and Aleš Panáček from the UP Faculty of Science, in collaboration with Milan Kolář and Renata Večeřová from the UP Faculty of Medicine and Dentistry Department of Microbiology, tested the joint antibacterial effect of cyanographene with bound silver particles in combination with four types of antibiotics that differ in their mechanisms of activity.

“We were able to use silver nanoparticles to restore the effects of colistin, gentamicin, and ceftazidime, antibiotics that act on the bacterial membrane and also block the synthesis of proteins and the cell walls of bacteria, resulting in the death of these unicellular organisms. Thanks to the combined action of very low concentrations of silver nanoparticles and antibiotics, even resistant bacteria can be effectively eliminated. At the same time, possible side effects are minimized,” said Lucie Hochvaldová.

Aleš Panáček and his team of co-authors from the Faculties of Science and Medicine in Olomouc described the high efficiency of even very low concentrations of silver nanoparticles against a wide range of resistant bacteria in 2006. In addition to testing the antibacterial effects of nanoparticles, the joint effect of nanoparticles combined with antibiotics was also studied. “In the last ten years, a large number of scientific papers have been published in which the restoration of the effect of antibiotics using nanoparticles has been demonstrated. However, most of those works did not describe the degree of nanoparticle intensification. Furthermore, the nanoparticles were tested only on antibiotic-sensitive bacteria, i.e. bacteria causing easily treatable infections. On the contrary, our team focused on resistant strains of bacteria that pose a great risk to humans,” said Hochvaldová.

The promising research results come at a time when medicine is struggling with growing resistance of bacteria to antibiotics. As a result, the range of effective antibiotics to fight bacterial infections which cause death of hundreds of thousands of people worldwide each year is gradually narrowing for the doctors. “Significantly higher doses of antibiotics are now needed to control bacterial infections, leading to a number of side effects. The synthesis and development of new drugs with new mechanisms of action are relatively expensive, and with the current rate of bacterial resistance to antibiotics, and thus scant prospect of profit, more and more pharmaceutical companies are leaving this line of research. As a result, in the treatment of bacterial infections, there is relatively large room for the use of nanomaterials with antimicrobial effects,” points out Hochvaldová.

A group of scientists led by Aleš Panáček will continue to study the use of silver nanoparticles in antibacterial treatment and anti-tumoral phototherapy. The time has come to test these new findings in laboratory conditions and in the treatment of systemic bacterial infection in lab animals. “These are necessary steps for the possible transfer of the results of our research into clinical practice,” said Hochvaldová.

Already during her doctoral studies, Lucie Hochvaldová focused on the theoretical and practical study of the synergistic effects of nanomaterials on resistant bacterial strains. Recently, the results of her work have been published in two prestigious journals – Nanotechnology Reviews and Scientific Reports. For example, her review paper in Nanotechnology Reviews summarizes how various nanomaterials themselves destroy bacteria. It also includes the results to date of the synergistic antibacterial effect of various nanomaterials, such as silver, gold, or titanium dioxide, in combination with antibiotics that have lost their effectiveness against the resistant bacteria in question. Part of her activities is also a description of possible modes of joint antibacterial action and effectiveness of combined antibacterial therapy, depending on the mechanism of the antibiotic action and the resistance mechanism of the given bacteria. Overcoming bacterial resistance by combining antibiotics with nanoparticles may offer hope for the impending antibiotic therapy crisis.