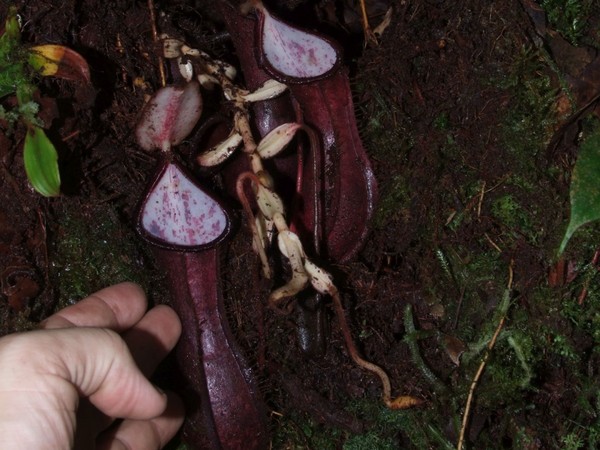 An unusual carnivorous tropical pitcher plant hunts its prey underground in the dark. The plant was discovered on an expedition in the Indonesian part of Borneo by an international team led by scientists from the Palacký University Faculty of Science. It is the first species of this plant to create functional underground traps. The plant was given the name Nepenthes pudica, due to the fact that it hides its pitchers underground. An article about the discovery of a new species of tropical pitcher plant was published in the international scientific journal PhytoKeys.

Pitcher plants are carnivorous plants that grow mainly in Southeast Asia. These climbing vines create ingenious traps for insects at the end of the leaves in the form of pitchers with liquid inside, which are usually strikingly coloured. Thanks to this, pitcher plants became popular in Europe as ornamental plants, where they have been cultivated since the end of the 18th century. They are commonly found in greenhouses or DIY stores.

In Borneo, during an expedition to the Indonesian province of North Kalimantan, scientists came across a new species of pitcher plant, which shatters traditional ideas about these plants. “We have managed to discover a pitcher plant that behaves completely differently from all other known species. The newly discovered species places its up to eleven-centimetre traps underground. This pitcher plant catches underground animals in cavities or directly in the soil. Invertebrates, especially ants, various mites, and beetles usually end up in its traps,” said Martin Dančák from the Department of Ecology and Environmental Sciences.

Unlike all other pitcher plants, this species produces not only above-ground shoots but also short underground stems, which usually grow into a cavity where they then produce leaves. While the traps themselves are distinctly brown-red in colour, the leaves from which they grow are white. This is because they lack chlorophyll. “Interestingly, in addition to the prey, we also found many animals that have adapted to this environment in the underground traps and are not digested by the plant. For example, mosquito larvae, nematodes, and one type of worm, which was also described as a new species after our expedition, can live there,” said Václav Čermák from the Mendel University Faculty of Forestry and Wood Technology.

The newly-discovered species of pitcher plant grows in Borneo on ridges and mountaintops. According to the scientists, the carnivorous plant hides its traps underground probably because the narrow mountain ridges can dry out quite quickly. The underground cavities, on the other hand, are humid and teeming with food. It is therefore advantageous for the plant to place its traps there and thus ensure a stable supply of nutrients. “This is just our hypothesis for now,” said Dančák.

The scientists discovered the new species of pitcher plant by chance. During a several-day ascent up a nameless mountain, they spotted a plant that had no traps, but identified it as a pitcher plant based on its body structure. On closer examination, the scientists found traps only on the young plants, and on one adult plant they discovered a trap almost entirely embedded in the soil.

The expedition members initially thought that it was probably a coincidence due to local conditions. “As we climbed to the top of the mountain, we kept finding more and more plants without traps, which kept boggling our minds. Then my colleague Ľuboš Majeský from the Department of Botany, while taking pictures, tore off a growth of moss that covered the bottom part of a tree. Suddenly, under the moss cushion, the beautifully developed pitchers of this plant appeared,” said Dančák.

The scientists then searched further and discovered more pitchers hidden in a dark cavity under the tree. “We then inspected other similar trees where the pitcher plants were growing. We found that this species of pitcher plant actually directs its shoots underground and creates traps in the cavity on purpose,” explained Majeský.

Scientists believe that such a remarkable species of carnivorous plant could help protect the local forests. “This find is significant for nature conservation in Indonesia, highlighting the importance of Borneo’s tropical rainforests and their extraordinary biodiversity. We hope that the discovery of this new carnivorous plant will help preserve the character of the local landscape and stop or inhibit further conversion of forests into oil palm plantations,” added another expedition participant, Wewin Tjiasmanto of the Indonesian Centre for Wetland Habitat Conservation.