Successful reconstruction of mysterious beetles from the dinosaur era 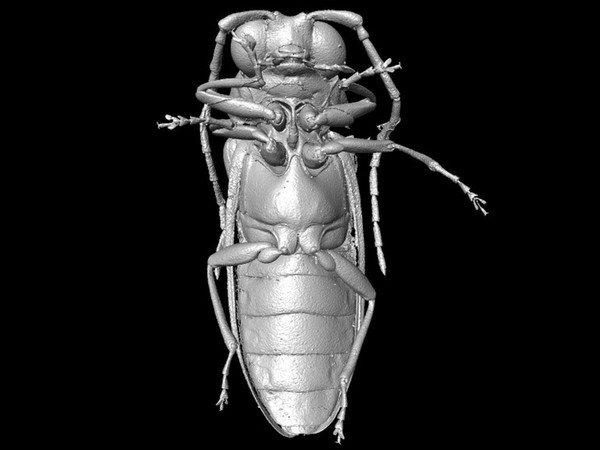 An international team of scientists led by David Peris from the University of Bonn, Germany, and Robin Kundrata from the Department of Zoology at the UP Faculty of Science has managed to create a detailed reconstruction of the appearance of beetles whose 99 million-year-old fossils were found in Burmese amber in 2019.

Using modern computed tomography, the researchers identified the detailed morphology of these beetles and attributed them to the family of click beetles. The results of this study, that helps better understand the evolution of insects during the Cretaceous period of the Mesozoic era, were published in the prestigious journal Scientific Reports.

In January 2019, the Spanish palaeontologist David Peris, one of the two main authors of the published study, found several specimens of unknown beetles in Mesolithic amber from the state of Kachin in northern Myanmar. Peris and his colleagues from the Czech Republic, Spain, Germany, and the United States then began to study the morphology of newly found fossil beetles in detail, while another scientific team described the group as Mysteriomorphidae, based on two other specimens from the same site.

Modern technology deciphered the origin of these mysterious beetles

Such a demanding reconstruction of the mysterious beetles living in the dinosaur age was chosen due to the fact that it was not possible to observe basic diagnostic morphological features on the found bodies, which made it difficult for scientists to classify these beetles. “The first published study left unanswered questions about the systematic position of this unique evolutionary lineage. Therefore, we used the latest technology to answer questions about the morphology and classification of Mysteriomorphidae within the beetle system,” explained David Peris of the Institute for Geosciences and Meteorology at the University of Bonn.

The authors used the method of computed tomography (CT) to achieve the virtual reconstruction of one of the very well-preserved individuals. This modern technology can be used in palaeontology to study minute features, often inaccessible by other technologies. It also helps to examine internal structures, such as the genitals, if they are preserved. “Based on the detailed study of their morphology through modern computed tomography, we were able to better classify these beetles from the dinosaur age and found out that they were very closely related to members of the family of click beetles still living today,” explained the second author of the study, Robin Kundrata from the Department of Zoology, UP Faculty of Science, who is an expert on this group of beetles.

Insects preserved in amber for many millions of years are testament not only to the diversity and morphology of evolutionary lineages living at the time, but also to the composition of ancient ecosystems, in many ways different from those of today. That is why in addition to morphology the researchers also analysed the evolutionary history of beetles at the end of the Mesozoic. Earlier hypotheses assumed a low rate of extinction during the evolution of this order of insects, including the Cretaceous period of the Mesolithic era, when in a changing environment most seedless plant lines were replaced by flowering plants (Angiosperms), which is often referred to as the “Cretaceous revolution”.

These significant changes in the ecosystem enabled the rapid development of many groups of insects, particularly flower pollinators. On the contrary, other groups that had been adapted to evolutionarily older seedless plants, were not able to cope with those changes and became extinct. Researchers have gradually compiled a list of fossil families of Cretaceous amber beetles (including Mysteriomorphidae), which are known only from that time. Since they do not appear in the later fossil record, it has been assumed that they did not survive the end of the Mesozoic period. “Our results support the hypothesis that beetles – and perhaps other groups of insects, too – had a decline in diversity during the Cretaceous revolution,” added Peris.

According to Kundrata, the researchers will now seek to obtain additional material from the Burmese amber and then study the diversity of Mysteriomorphidae, because the known specimens probably represent several morphologically different species.