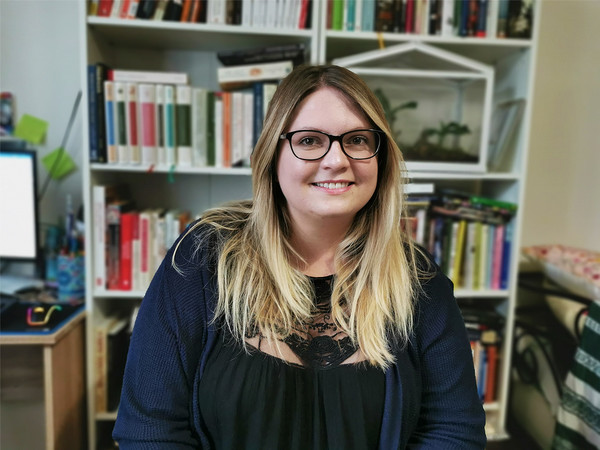 Tereza Kalousková from the International Relations Office of the Palacký University Rector’s Office is the laureate of the Aspen Central Europe Leadership Award. The award is bestowed to inspiring young leaders from Central and Eastern Europe and is awarded by the Aspen Institute Central Europe. In addition to Kalousková, Michal Tarnowski from Poland, who is involved in educational projects, was also awarded.

The names of the award winners were announced at the annual conference Where Are You Going, Czechia 2020 (Kam kráčíš, Česko), the main theme of which was restarting Central Europe. “Every year, the institute awards young people with outstanding achievements in the fields of responsible citizenship and values-based leadership with positive societal impact. This year, Tereza Kalousková and Michal Tarnowski were granted this award, since they have demonstrated their dedication during the pandemic crisis,” said Milan Vašina, Executive Director of the Aspen Institute CE.

Tereza Kalousková is a graduate of English Philology and History at the UP Faculty of Arts. She is currently a doctoral student and works at the Rector’s Office as an international relations officer. She received the award for her extraordinary activities on behalf of foreign students at UP during the spring coronavirus pandemic. She provided all kinds of support to the students who stayed in Olomouc and found themselves in a difficult situation far from home. She made herself a go-between, providing them with necessary information and important contacts both at the university and other institutions such as public health offices. She was also helpful in terms of their leisure activities, being one of the initiators of a series of online concerts for foreign students. “We believe that she deserves acknowledgment for actively promoting responsible citizenship. Tereza is an inspiration for the entire student community,” said the Aspen Institute CE representative, highlighting the activity, energy, and empathy she employed during the global pandemic.

“I really appreciate this award, but I have to say it does not belong only to me; what was going on was teamwork in which many colleagues from various university departments took part,” said Kalousková.

The purpose of the Aspen Central Europe Leadership Award is to strengthen the influence and potential of personalities under the age of 40 who are actively committed to the betterment of society. It was first awarded last year to Do Thu Trang, the author of the Asijatka.cz blog, and Michal Mižigár, a Romani studies and history student.