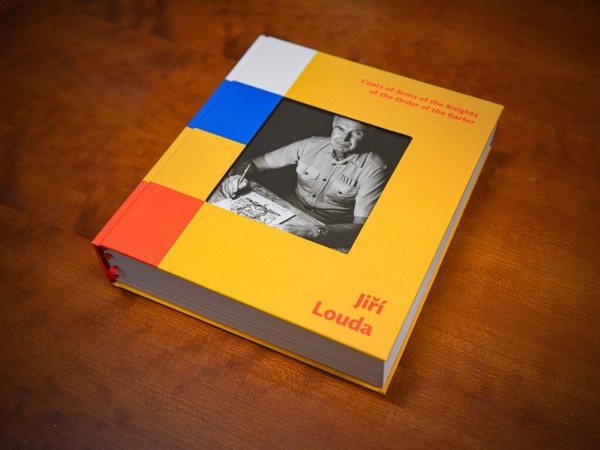 UP Press has published an important book by Jiří Louda. In the photograph below are UP Press Director Aleš Prstek and Otakar Fojt from the British Embassy. In the other photo are the first and second copies of the book off the press, reserved for the British Royal Family. Photos: Vojtěch Duda
Monday 9 November 2020, 15:06 – Text: Tomáš Franta

More than three years of editorial work, more than a thousand distinctive drawings of coats of arms, and its imprimatur via an introduction by Prince Charles of Britain. Palacký University Press, in cooperation with the Olomouc Regional Museum, announced the publication today in the presence of British Ambassador Nick Archer and the Mayor of Olomouc Miroslav Žbánek, also marking what would have been heraldist Jiří Louda’s centennial. The book maps the nearly seven-century history of the Order of the Knights of the Garter, one of the most important such orders in Europe, at whose head sits Queen Elizabeth II.

Jiří Louda: Coats of Arms of the Knights of the Order of the Garter / Erby rytířů Podvazkového řádu is the title of the ambitious bilingual English-Czech – bordering on the bibliophile – publication summarising the life’s work of the world-famous heraldist Jiří Louda, who spent the majority of his life in Olomouc, the author of the Greater Coat of Arms of the Czech Republic, among others.

Connection between the Czech Republic and Great Britain

“The England of the knights became Jiří Louda’s muse for decades. He found his passion for it during World War 2, when he was a parachutist in the British Royal Air Force, and his fascination with the history of the Knights of the Order of the Garter never abated. The personal and typically British style which Louda brought to countless drawings of the Order’s individuals’ coats of arms was even mentioned by Prince Charles in his introduction,” UP Press Director Aleš Prstek commented.

Proof that the book’s publication is resonating on the British Isle is underlined by the active participation of British Ambassador Nick Archer in the book’s launch. During the launch, university representatives also symbolically handed diplomat Otakar Fojt the first two copies of the book – intended for Queen Elizabeth II and Prince Charles, her successor to the throne and to the helm of the Order.

Among the members of the Knights of the Garter, whose history has been in the writing for 672 years, we can find the names of many world-famous personalities in political, cultural, and society life. Readers can find not only the personal coats of arms of the above-mentioned Queen Elizabeth II and Prince Charles, but also for example the coats of arms of Prince Philip, Field Marshal Bernard Montgomery, Sir Winston Churchill, Baroness Margaret Thatcher, Sir Edmund Hillary, and Prince William.

“The close connection between Jiří Louda and England was evident in nearly every piece of his legacy which we reviewed in preparing the book. What is more, all those materials revealed a story which we could not keep only to ourselves, which is why we have prepared such a remarkable exhibition,” reminded Břetislav Holásek, Director of the Olomouc Regional Museum, of the exhibition entitled Jiří Louda – Život mezi erby (Jiří Louda – Life Among Coats of Arms), planned to run until 10 January 2021. “Jiří Louda, due to his extraordinary life story and his aristocratic noblesse, is one of the most exceptional personalities of the 20th century – not just in Olomouc, but in the whole of the Czech Republic,” Holásek added.

“I’ve always known that Jiří devoted an enormous effort to depicting the coats of arms of the Order of the Knights of the Garter. However, examining the extent of his work in the materials he left behind was shocking to me – in the good sense of the word. None of us were prepared for something so complex and on such a large scale,” revealed Karel Müller, Director of the Regional Archives in Opava, a long-time friend of Jiří Louda and the co-author of the publication.

Towns Unite! or A national crowd-funding

Jiří Louda is not only the author of the Great Coat of Arms of the Czech Republic and the Knights of the Garter coats of arms. He also authored hundreds of coats of arms for Czech towns and cities. And Louda’s “trail” across the country became an important component in the book’s publication.

Work on such a magnificent publication as Jiří Louda: Coats of Arms of the Knights of the Order of the Garter / Erby rytířů podvazkového řádu required a huge financial investment. In order for this magnum opus to be carried out in appropriate style and format, UP Press decided to appeal to Czech cities and towns for whom Louda designed their coats of arms for a contribution to the publication of the book.

“The feedback we got was wonderful. We received small financial donations, from 50 to 1000 euros, from over twenty Czech cities and towns. And the City and Region of Olomouc of course also contributed significantly to the publication,” Prstek recounted.

Together with a contribution from the National Cultural Fund they were able to collect more than 15 thousand euros, which enabled the publication of the book in its final form. “It was like a national crowd-funding,” added Prstek, with some slight exaggeration, referring to the large number of small donors who supported the book’s publication.

“Jiří Louda was the prototype of the modest hero in whom are combined lifelong dedication and courage. I’m incredibly happy that this timeless work has lived to see such a magnificent, deserving publication. I consider the participation of our university in the creation of this book as a logical responsibility,” added UP Rector Jaroslav Miller. In 2004, Louda was awarded an honorary doctorate by Palacký University Olomouc. During his lifetime he also received awards from the City of Olomouc, the Olomouc Region, and last but not least, the Medal of Merit, given to him personally by the President of the Czech Republic, Václav Havel.

More detailed information on the book is available at louda.upol.cz.