UP successful in another two rankings 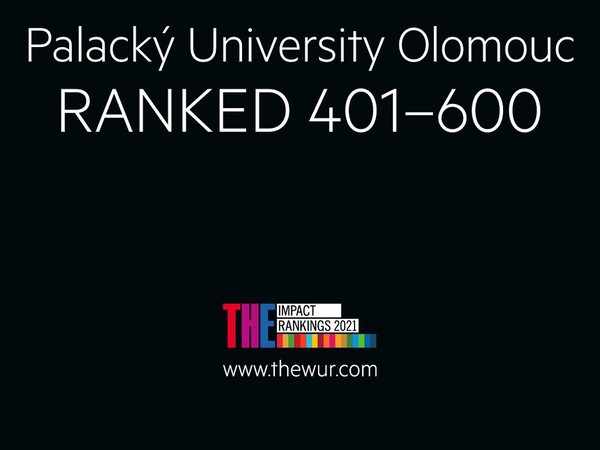 The latest editions of two international university rankings are good news for Palacký University Olomouc. According to the Centre for World University Rankings (CWUR) 2021/2022, UP has repeated its best ranking to date, taking 572nd place. UP has also maintained its position in the THE University Impact Rankings 2021 despite the increased number of ranked universities.

In the CWUR rankings, Olomouc’s university ranked in the top 2.9% in competition with almost 20,000 universities. Compared to other domestic universities – there are 12 of them in this year’s ranking – UP is second best, just as last year, after Charles University. Only Masaryk University and Czech Technical University made it into the top one thousand in addition to the two oldest Czech universities.

“CWUR is another global ranking which documents the swift rise of Palacký University Olomouc in recent years. The fact that UP, despite the growing number of universities ranked, has defended its dominant position and ranked ahead of all other universities in the Czech Republic except for Charles University obligates us for the future. I believe that the new management will do their best to make a further qualitative shift towards first place,” said Rector Jaroslav Miller about the CWUR results.

CWUR adjusted its methodology in 2019–2020 to place equal emphasis on the educational environment and on research. It ranks universities based on four metrics: quality of education (25%), employability of graduates (25%), quality of staff (10%), and research performance (40%), which includes research, high-quality publications, the number of research papers in influential journals, and citations. The assessment is based primarily on Thomson Reuters databases and tracks data up to ten years back. It works only with available data, excluding the reputation of the university, which is a substantial part of other prestigious rankings. In research performance, UP has maintained its 535th position as in the previous year, which means second place in the national standings after Charles University (173rd), with Masaryk University in third (549th). Detailed results are available here.

The third annual Times Higher Education (THE) rankings, focussing on selected sustainable development goals, rank 1115 universities from 94 countries. This is almost 350 more educational institutions than a year ago. UP has nevertheless maintained its position in the ranking and once again has been ranked between 401st and 600th places. Together with Charles University, Masaryk University in Brno, and the Czech University of Life Sciences in Prague, UP dominates in the national comparison. The Czech Republic is represented by a total of seven universities.

“The global rankings assess the contribution of universities to sustainable development, and I am delighted that Palacký University is one of the most progressive universities in the Czech Republic in this aspect,” commented Miller.

To be ranked in the overall ranking, universities had to provide information for at least four goals. If they provided more than that, the three best scores, plus the mandatory Goal 17 (Partnerships for the Goals), determined their overall ranking. UP achieved its best scores in Good Health and Well-Being (score 65.5), Sustainable Cities and Communities (57.9), and Decent Work and Economic Growth (55.1).

In the overall ranking, UP ranks highest (201st to 300th in the world) in these goals: Good Health and Well-Being, Sustainable Cities and Communities, and Industry, Innovation and Infrastructure.

On the right track

“The societal impact of individual universities and their activities in terms of sustainability development is a theme that has resonated at our university in recent years. In order to develop a concept for sustainable development at UP, we had an external evaluation carried out by the Ministry of Industry and Trade in 2019 with the focus on social responsibility. This helped us realise that as a university we quite naturally carry out many outstanding activities in this area; however, we have reserves regarding their systematic documentation as well as the promotion of our results. We have therefore focussed on these aspects in the following years, and the results of the latest ranking have proven we’re on the right track,” said Hana Marešová, Vice-Rector for Strategic Planning and Quality.

The ranking is available here.