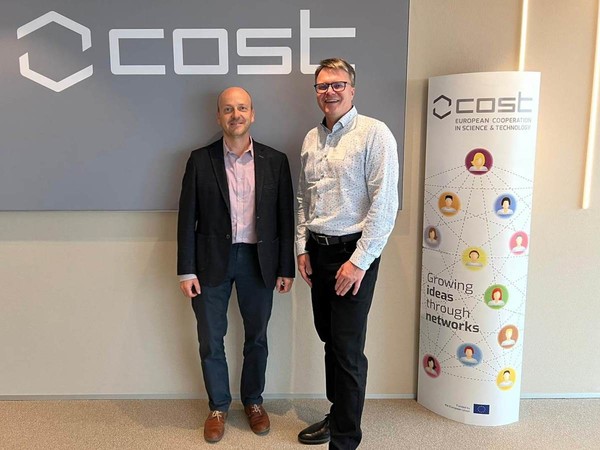 CATRIN scientists will be involved in a large project from the COST programme called Confined Molecular Systems: From a New Generation of Materials to the Stars (COSY), which is aimed at supporting international research cooperation, multidisciplinarity and young researchers. Computational chemists Michal Otyepka and Miroslav Medveď will focus on the development of new carbon materials for photochemical and biomedical applications and the field of single-atom catalysis within one of 129 participating research groups from 33 countries.

“This newly awarded grant is a result of a long-term collaboration and effort of a consortium of research groups from all over Europa, which has already had several successful projects under the COST programme in the field of modern spectroscopy and computational chemistry. The aim of the project with the acronym COSY is to redefine the current state of play in the field of confined molecular systems and to find innovative ways to translate knowledge through applications into sustainable industry as part of the transition to greener technologies, in accordance with the EU Green Deal programme. It is a broad-scoped project intended to be a platform for cooperation of important theoretical and experimental scientific groups in Europe and partner countries,” said Medveď, who is also a member of the Management Committee of the project. Scientists from Olomouc will be particularly active in carrying out research tasks dealing with (photo)reactivity and design of new materials associated with specific applications, such as (photo)catalysis, sensing, imaging and biomedicine. “Specifically, we plan to engage in partial tasks focused on experimental-theoretical evaluation of the activity of single-atom metal catalysts based on graphene and other 2D materials, as well as on the study of photoactivity of carbon dots with applications in the fields of organic synthesis and electrochemical/photocatalytic reactions. We expect that the interconnection of expertise of top research groups will lead to the development of innovative strategies for new materials with a wide range of applications,” explained Otyepka.

The four-year project, which will start on 27 September with a kick-off meeting of the members of the Management Committee in Brussels, will support the mutual cooperation and communication of individual research groups by organising joint conferences or workshops, preparing joint publications and follow-up projects, as well as, for example, exchanges of scientists, with support going mainly to young researchers. The Czech Republic is also represented in the project by researchers from the J. Heyrovsky Institute of Physical Chemistry of the Czech Academy of Sciences. The principal investigator is María Pilar de Lara-Castells from the Spanish National Research Council (CSIC).

The project consists of five interconnected research topics that will focus on accurate description of interactions between molecules and their confining environment using modern tools of quantum chemistry, effective description of molecular movement in confined structures, synthesis and characterization of stability, reactivity and properties of novel metal and metal oxide-based nanomaterials and subnanometric clusters for applications such as luminescence, sensing, biological imaging, teranostics, energy conversion and (photo)catalysis, or also characterization of phenomena of astrochemical significance.