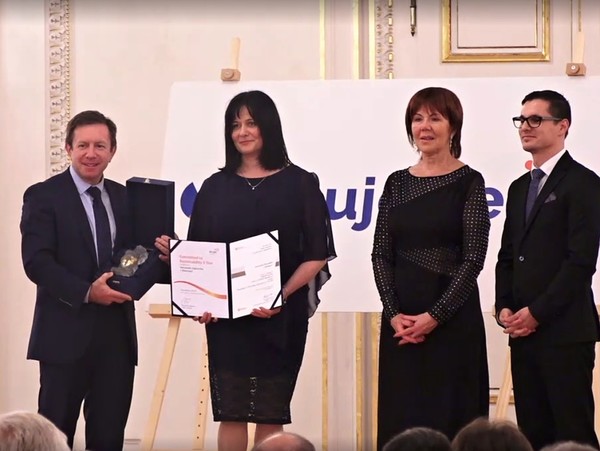 The award was accepted in Prague by Rector Jaroslav Miller and Vice-Rector Hana Marešová. Photo: Ministry of Industry and Trade of the Czech Republic
Friday 29 November 2019, 11:49 – Text: Ivana Pustějovská

“These national awards offer the opportunity to compare the best organisations and learn from their best practices," said Deputy Prime Minister and Minister of Industry and Trade Karel Havlíček. UP was awarded for social responsibility and won first place in the public sector category together with Technical University of Ostrava.

“This achievement represents the success of the entire university, but the team of Vice-Rector Marešová deserves the greatest credit for it. I would like to thank her and all my other colleagues,” said Rector Jaroslav Miller after receiving the award.

Palacký University enrolled in the programme to find out how it stands in the competition with other schools in fulfilling the third role of the university – working for the benefit of society, both in the city and in the region. Recently, UP was particularly and most importantly involved in local and regional action plans for education; volunteer activities such as Civic University, in which students and academics offer their knowledge via lectures to the public; the Euforka project, which seeks to mediate relevant information about Europe; and the student association Sustainable Palacký, which promotes environmentally friendly behaviour. “We perceive the university as a community that systematically helps its members even in the public space. This is possible through the involvement of experts, the work of many volunteers and student organizations, and thanks to the extraordinary supportive environment that is still being expanded and modernised,” added Vice-Rector for External Relations Petr Bilík.

The university wanted to get an outside view on its activities. “We wanted to conduct an external evaluation of Palacký University and, in addition to comparing it with other schools, to get information on key trends in social responsibility and sustainable development in our country," said Marešová, Vice-Rector for Strategic Planning and Quality.

In practice, the evaluation of the school included both its self-evaluation report according to the conditions of the awarding authority and inspections by representatives from the ministry who verified everything on the spot in Olomouc.

It has resulted in the first place in the Czech National Prize for Social Responsibility, which UP shares with the Technical University of Ostrava. In addition, the victory includes being granted the internationally recognised Committed to Sustainability Award for three years and the inclusion of UP in the database of the European Foundation for Quality Management.

“We were positively rated as a very active institution with an awareness of active regional cooperation, social responsibility and sustainable development,” added Marešová. Apart from international prestige, the feedback from evaluators is also very important for the university, as they recommended, among other things, to develop a comprehensive vision and a strategy for the third role of the university. “We will work on this in the next period, as well as on the selection of criteria according to which the university’s activities in the third role will be evaluated and taken into account when evaluating UP staff. The obtained information and suggestions of areas for improvement will then be used in the development of a strategy in the third role of UP for the next period. In the coming months, we will have a university-wide debate on the preparation of a new strategic document –UP Long-Term Goals for 2020+,” added Vice-Rector Marešová.