Quarantine Music: Live concerts on Facebook to lighten up life for foreign students in confinement 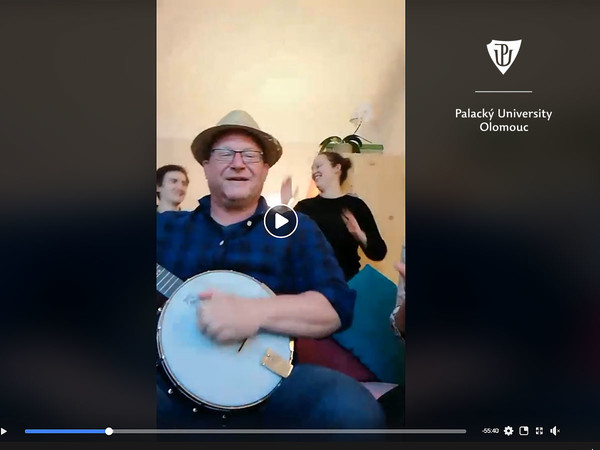 Banjo, tambourine, straw hat, and a repertoire of American folk music. An hour-long Facebook live stream on Saturday April 11th of songs by David Livingstone, UP Faculty of Arts, and his family kicked off a series of on-line performances which the UP International Relations Office has prepared for (not only) foreign students, who are at present in preventive isolation in Olomouc dormitories due to the current crisis. Four more performances are planned this April on Facebook.

“The idea of concerts for Erasmus students arose in connection with the current situation at the dormitories. We are in daily contact with the students and can only imagine how difficult it must be for them to be in quarantine, without the possibility to return home to family and friends, or even to go outside. Thus we wanted to lighten things up a bit, and show them not only that UP is thinking about them, but also to show them, at least on-line, how their stay in Olomouc might have been had the global pandemic not occurred,” said Tereza Kalousková from the UP International Relations Office. Her colleague Klára Henzlová is also taking part in organising the performances.

The Internet cultural gatherings will take place every Wednesday and Saturday evening over the next two weeks. Music and other performing arts will be presented by either UP personalities or well-known Olomouc artists. “We wanted the performers to be associated with the university and/or Olomouc,” explained Kalousková.

After the Livingstone living room entrée, on Wednesday April 15th an employee from the Rector’s Office, Salih Hadžiabdić, will play and sing songs including some from his native Bosnia and Herzegovina on Facebook. He will be live-streamed on the UP International Relations Department profile and in a Facebook group for foreign students at UP.

On Saturday, April 18th, those interested can watch a performance organised by Joanna Sio from the Departments of English & American Studies and Asian Studies. Joanna Sio is from Hong Kong, and when she is not teaching, she is performing and organising stand-up comedy and improv. This is the form of entertainment she will be offering via the stream on the Faculty of Arts Department of English Facebook page.

On Wednesday, April 22nd, there will be an on-line concert by Olomouc singer-songwriter and busker Terez Wrau, who can be seen performing regularly at university events and who also recently played a musical thank you for all UP volunteers. Terez Wrau’s live performance will be streamed on the UP International Relations Facebook page.

On Saturday, April 25th, Toby Wehle, a student at the Department of English and American Studies at the UP Faculty of Arts, will live-stream a musical performance. Details will be posted by UP Foreign Relations Office shortly.