Kevin Gamache a Glenn Tiffert accepted an invitation by the Centre for International Humanitarian and Operational Law at the UP Faculty of Law. Photo: Eva Hrudníková
Thursday 19 January 2023, 15:10 – Text: Eva Hrudníková, Pavla Hubálková

International academic cooperation as a potential security risk? U.S. experts Glenn Tiffert and Kevin Gamache came to Olomouc to present their experience and best practices in combating these threats. They held a two-hour lecture organised by the Centre for International Humanitarian and Operational Law (CIHOL) at the UP Faculty of Law.

“Members of the Department of International and European Law as well as CIHOL members have long been involved in security issues. The lecture aimed to open the topic of foreign influence operations in universities and the practical and societal implications of foreign interference that can threaten national security,” explained Petr Stejskal on behalf of the organisers; he works at the Department of International and European Law at the UP Faculty of Law and is a member of CIHOL.

The lecture was organised by the faculty in cooperation with the U.S. Embassy in the Czech Republic, the Centre Against Terrorism and Hybrid Threats at the Czech Ministry of the Interior, and Charles University in Prague. “Thanks to this cooperation, we were able to invite to Olomouc top experts on counter-influence issues from the United States – Kevin Gamache, director of the US association Academic Security and Counter Exploitation Program, and Glenn Tiffert, a research fellow at the Hoover Institution at Stanford University and a specialist in the political and legal history of the People’s Republic of China,” said Stejskal.

“China and the US are each other’s greatest research partners, with Germany and the UK coming in second and third for both countries,” Tiffert said in his lecture. “But China is not Germany or Canada – you can’t have the same approach because China doesn’t respect the same rules and rights,” Tiffert explained. As one specific example, he cited the case of “CRISPR babies”, where Chinese scientist He Jiankui used unapproved gene scissors to edit the human genome. “He acted against ethical rules. He was first hailed as a hero in China but then came a worldwide wave of criticism. This case shows that the rules that apply in America or Europe cannot be expected to be followed in China, motivated by a desire to be the best and the first country.”

In his study of Chinese history, Tiffert employs his knowledge of the construction of the modern Chinese court system and the judiciary and combines it with the computational methods of data science. At the Hoover Institution, he co-chairs the China’s Global Sharp Power project and works closely with government and civil society partners to document and build resilience against authoritarian interference in democratic institutions.

Kevin Gamache explained to participants why is it necessary for a research institution to have a security programme. “The world has changed. Over the last twenty years, the opportunities for collaboration have grown, but the geopolitical environment has also changed. We need to better understand and verify who we are working with. We should always ask these questions: Do I know who we are really working with? Who is funding this? What is the potential risk to the institution, even at the level of reputation? How can we mitigate potential risks?”

Then he introduced more in detail the Academic Security and Counter Exploitation Program (ASCE), where he is a director. “Our goal is to raise security awareness in academia. When we started in 2006, there were ten of us; today over 200 universities are involved. And I’m very happy that we’re meeting here today because we cannot solve this issue on our own, we need to work together internationally.” He went on to describe how ASCE uses the expertise of its member universities to help address potential threats posed by foreign adversaries to US academic institutions.

The lecture was attended not only by university students and academic staff, but also representatives of the Czech Army and government institutions. “I believe we have shown that this is a very sensitive and urgent issue that cannot be downplayed and that also affects Czech academia,” Stejskal said.

He pointed out that the academic sector has some specifics and advantages in many respects, such as its openness and connection to the world. “This can be abused, however, to steal sensitive technologies or to influence events in a country. The lecture presented the mechanisms that are needed at the academic to national levels to minimise these risks while maintaining the openness of the academic sector and international cooperation, two of its key characteristics,” Stejskal added.

The organising institute, the CIHOL centre, was established under the auspices of the Department of International and European Law in 2019, as a result of long-term cooperation between the UP Faculty of Law and the Czech Army. Thanks to the CIHOL activities, the faculty received, among other things, the 2020 National Security Council Award for significant contribution to the security policy of the Czech Republic. 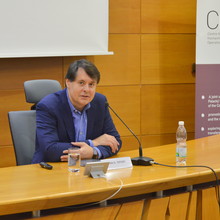 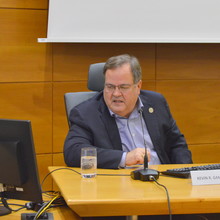 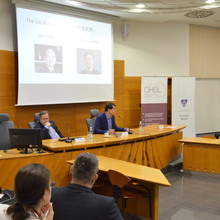 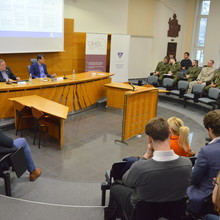